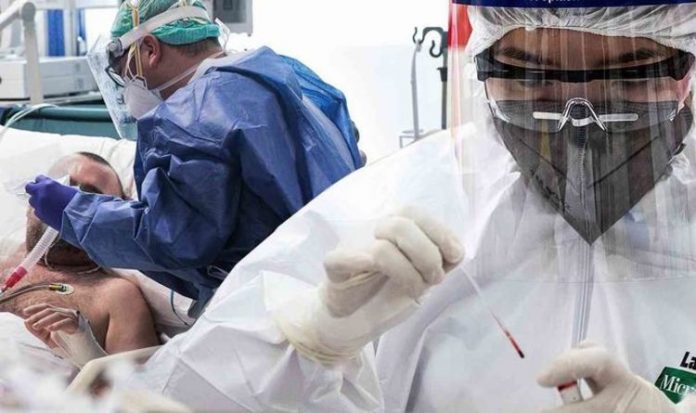 Government adviser Chris Whitty said even this date for a successful vaccine was “not a certainty”. The Chief Medical Officer for England also believes it could take another year before a safe vaccine is developed and ready for widespread distribution. Professor Whitty added: “I think it is unlikely we will have a vaccine that is highly effective and ready to deploy at scale this winter.

“However, I think there is a reasonable chance that we will have vaccines, not a certainty, in the period before the following winter of 2021/22.”

A vaccine will have to go through three trial stages then will need to be manufactured on an industrial scale for distribution.

The scientist said he would be “surprised” if a vaccine would be available before this Christmas.

Professor Whitty’s predictions come at a time when the UK and the rest of the world needs a reversal of the economic consequences of the coronavirus vaccine.

Total deaths from the disease worldwide has been 803,410.

The pathogen has claimed the lives of 41,405 people the UK alone.

Mr Witty has explained that scientists have to make sure a vaccine, even if developed quickly, is safe.

This will mean rigorous trials, which takes time.

“That will be great but we should be planning on the basis of what we currently have.”

Speaking of the development of a successful vaccine professor Whitty said: “I would obviously be delighted if it came earlier rather than later.

“But I’d be quite surprised if we had a highly effective vaccine ready for mass use in a large percentage of the population before the end of winter.

“This would certainly not be before this side of Christmas.”