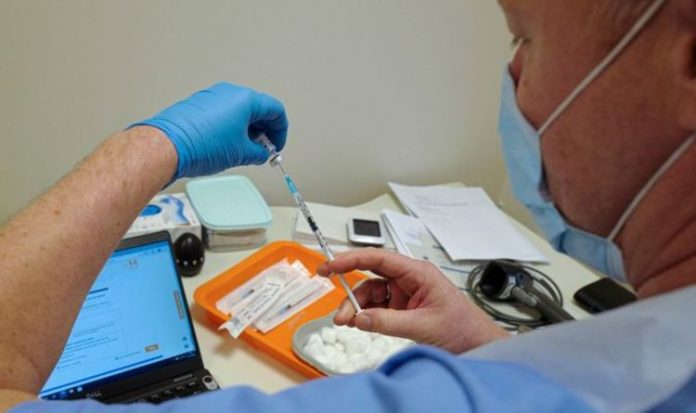 Millions of Britons could be inoculated at an unprecedented scale as soon as January in a major vaccination effort. Senior Whitehall sources told the Daily Telegraph that the Medicines and Healthcare Regulatory Agency (MHRA) could approve the jab on December 28 or 29.

Before the vaccine can be authorised final data must be presented to the regulator on Monday.

The mass vaccination program could take place in football stadiums and other large venues across the UK.

So far, the Pfizer vaccine, which researchers found was up to 95 percent effective, has made its way to hundreds of thousands of people in the UK after the vaccination scheme started last week.

Government policy has mandated the approach with vaccine rollout to begin with the elderly and most vulnerable.

Health workers are currently focussed on the first of nine stages, as they provide the jab to care home residents aged over 80 and their carers.

The remaining eight will cover ages 75 to 50, with an exception for vulnerable children and younger adults.

In Europe, the 27 member states of the European Union have pre-ordered the jab.

These include options, written into their contracts, to order additional doses.

The Prime Minister was questioned about the Government’s advice on coronavirus prevention after the Northern Ireland government yesterday announced a six-week lockdown from December 26.

He told BBC News: “What we’re saying now over this Christmas period is think of those rules about the three households that you can bubble up with, the five days, that is very much a maximum that’s not a target.

“I think people really get this. All the evidence I’m seeing is people really understand this is the time to look after and think about our elderly.”

Mr Johnson called on Britons to comply with existing Covid guidelines during the upcoming festive period.