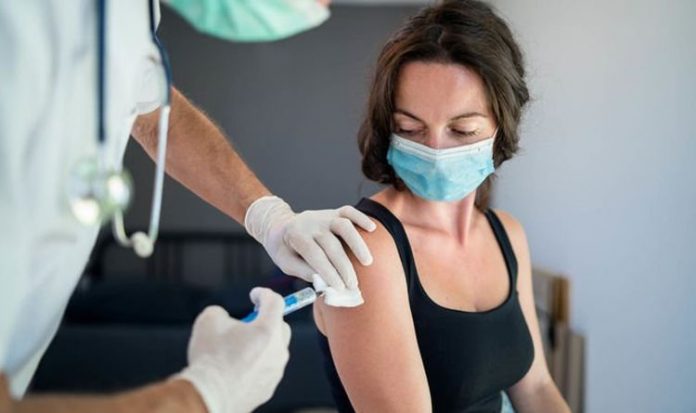 The vaccine could be a game changer (Image: Getty)

Britain has secured 100 million doses of the Oxford University vaccine that yesterday became the second approved for use in the UK. Along with the 40 million Pfizer vaccines on order, there is enough for every adult to have two doses and be protected. Mr Johnson said it was “truly fantastic news – and a triumph for British science”. He added: “We will now move to vaccinate as many people as quickly as possible.”

The first of an initial batch of 530,000 jabs will be dished out on Monday and officials pledged the NHS would administer them as fast as they become available.

Mr Johnson said he hoped harsh interventions such as the closure of hospitality venues could “recede into the past” by the spring.

But he urged people to stick to the rules and see in 2021 safely at home.

Health Secretary Matt Hancock said: “This is a real British success story, a moment of cheer for the whole nation and indeed for the whole world, because this low cost, easy-to-store vaccine will save lives everywhere.

“I am also now highly confident that we can get enough vulnerable people vaccinated by the spring that we can now see our route out of this pandemic.”

First and second jabs for both Oxford and Pfizer vaccines will be given up to 12 weeks apart, so more people can get their first one sooner.

Government scientists said data showed the Oxford vaccine was around 70 percent effective after just one dose. It takes around three weeks for immunity to develop.

The second dose is crucial to ensure longer-term immunity, but spacing them out will allow more people to have partial protection.

Mr Hancock said: “It brings forward the day on which we can lift the restrictions. The NHS will deliver the vaccine into people’s arms as fast as it can be produced.”

The Oxford vaccine, stored in a standard fridge, will be easier to distribute.

The Pfizer jab must be kept at ultra-low temperatures of -70C.

Mr Johnson said tens of millions would be ready by the end of March.

Experts say at least two million people a week must be vaccinated to avoid a third Covid wave.

Pascal Soriot, the chief executive of AstraZeneca, said deliveries would be ramped up “very rapidly” in the next fortnight and the company could eventually supply two million doses a week.

He said: “We can go to two million. In January we will already possibly be vaccinating several million people and by the end of the first quarter we are going to be in the tens of millions already.”

Older people and those with underlying health conditions are being prioritised but all adults will eventually be offered a jab.

Professor Sir Munir Pirmohamed, of the Commission on Human Medicine, said the vaccine was up to 80 percent effective when two full doses were given around three months apart.

No one who caught COVID-19 at least a fortnight after receiving both doses became severely ill or needed hospital treatment.

Medicines and Healthcare Products Regulatory Agency chief executive Dr June Raine said her team had “very carefully and methodically and rigorously reviewed all the data on safety, on effectiveness, and on quality”.

She added: “No corners whatsoever have been cut. The safety of the public always comes first.”

Oxford University vaccinology professor Sarah Gilbert added: “To actually test a pandemic vaccine during a global pandemic is a difficult thing to do.

“We should aim high, we should aim to get more than a million vaccinated a week so we can work our way through particularly the at-risk groups in the shortest possible time. But it’s going to be a complicated task.”

Professor Gilbert said there was no evidence the vaccine will be any less effective against the Covid variants but her team was already working on responding to other mutations.

Shadow health secretary Jonathan Ashworth welcomed the approval of the Oxford vaccine and tweeted: “Now let’s go hell for leather to get jabs rolled out.”