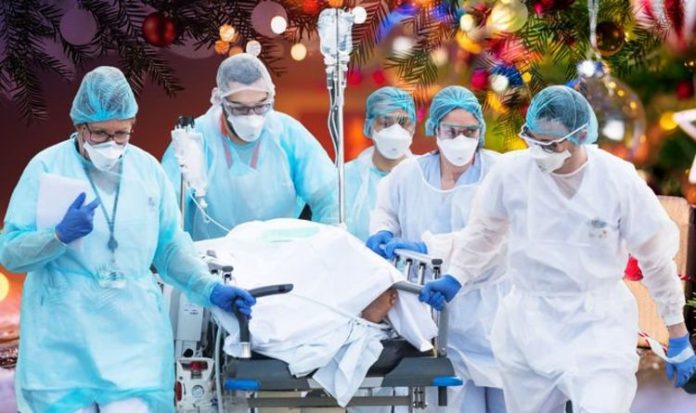 According to SAGE documents, those who spend the festive season with their families from different households may have to quarantine in late December and January.

The UK has been plunged into a second national lockdown this week which is set to end on December 2.

But fears it may be extended have already been raised and now the new report from SAGE urges more advice to be given to the public on how to manage their risk during the festive season.

Yesterday it was reported officials claim Britons may have to wait until late 2021 to be able to enjoy Christmas with their loved ones.

Scientists said that “planning a summer family get together could replace meeting at Christmas”.

The report added: “After a period of high exposure to multiple contacts of different networks – eg a social gathering – the risk of spreading infection to other people can be reduced by avoiding contact as far as possible for two weeks.”

SAGE adviser Professor Susan Michie said the Government must plan ahead for any rule-breakers.

She said: “It seems to me that the social contact with the government over following the rules is likely to break down over Christmas.

“This would be very detrimental to getting out of the pandemic.

Christmas could be cancelled due to COVID (Image: Getty)

“So I think it is worth the government considering a very different approach to Christmas, which is not based on rules.”

Epidemiologist Professor Tim Spector, of King’s College, added: “We urge everyone to respect the restrictions and help get the number of cases down as soon as possible to help the NHS, end the lockdown and get us in good shape for December.”

Graphics revealed during last weeks Downing Street press conference suggested the UK would see up to 1,500 deaths a day by early December.

This is far higher than the numbers seen during the first outbreak of the deadly virus back in Spring.

However, Government documents found the figures were far too high and were “amended after an error was found”.

This amendment comes after MPs voted to impose the new lockdown restrictions.

The forecast predicted around 1,000 deaths per day by December 8 – a figure on par with that in April.

Families may have to self-isolate in December (Image: Getty)

Just days after Sir Patrick Vallance presented a “very grim picture” in the fight agains the virus, the Government Office for Science corrected two of the slides.

This came after a separate model showed a worst-case scenario of 4,000 deaths a day by the end of December.

The terrifying figure was based on out-of-date data which has also been updated.

Both Sir Patrick and Chris Whitty, the chief medical officer, were questioned in the Commons science and technology committee and asked if the purpose of the data was to “frighten people”.

Sir Patrick said he “regretted” if he had not made it clear that those scenarios were models rather than projections.