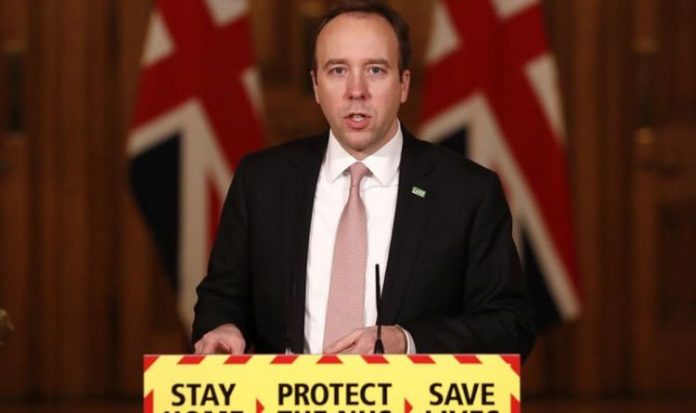 The figure was down 25 percent compared to last Tuesday, when almost 61,000 were reported. It comes as ministers officially revealed that more than 2.43 million people have received the first dose of a Covid-19 vaccine and 412,000 of those have had both jabs. But the steady progress came as the UK recorded the second highest daily death toll of the pandemic, with 1,243 further fatalities.

Health Secretary Matt Hancock said the Government was on track to meet its target of offering injections to around 15 million people by the middle of February.

He told MPs: “We have now, as of the early hours of this morning, ­vaccinated 39.9 percent of the over-80 year-olds in England.

“We will reach all over-80 year-olds and ensure they have the offer of a vaccine over the coming weeks and we’ll reach all the top four ­priority groups by February 15.”

Mr Hancock also said the take-up for jabs was increasing.

He said: “The ­proportion of ­people who are enthusiastic about taking the vaccine has risen ­significantly and the proportion who are hesitant has fallen.

“People can see the enthusiasm that others have been taking the vaccine.” Responding to calls for key workers to be prioritised, Mr Hancock promised the issue would be carefully considered.

He added: “We’ll look at, of course, teachers and police and ­others, but also we will look at shop workers and we will make those decisions based on the data.”

Despite rapid progress in deploying vaccines, pressure on the NHS is expected to remain dangerously high for several weeks.

Priti Patel said more than 35,000 patients with coronavirus were in hospital across the UK on Sunday (Image: Getty)

Home Secretary Priti Patel said more than 35,000 patients with Covid-19 were in hospital across the UK as of Sunday.

Latest figures for England showed there were 32,202 on wards at 8am yesterday, up 22 percent on last Tuesday. The number in mechanical ventilation beds soared 33 per cent week-on-week to 3,175.

Dr Vin Diwakar, NHS medical director for London, painted a grim picture of the situation in the capital, as he warned more patients may have to be sent elsewhere.

He said: “As the pressure from Covid-19 has increased, this has put pressure on the number of beds we have for other conditions. That’s why yesterday we opened the Nightingale hospital and admitted our first patients.

Half of deaths in England and Wales registered during the last week of 2020 involved coronavirus (Image: Getty)

“This time it’s taking patients who do not have Covid and this means that our hospitals have more beds to care for Covid patients themselves and for the very sickest patients.

“But we cannot do this indefinitely. If this infection gets further out of control, more and more patients from London will need to be transferred elsewhere.”

Dr Diwakar said at the start of November, London had 1,000 Covid-19 patients. This increased four-fold to 4,000 on Christmas Day and has since doubled to just under 8,000, with more than 1,000 of those in critical care.

The Office for National Statistics showed almost half of the hospital deaths in England and Wales ­registered ­during the last week of 2020 involved coronavirus.

Some 48 percent were in ­hospitals and 28 percent in care homes. Across all settings, 31 per cent of the 10,069 deaths registered ­mentioned Covid-19 – the highest proportion since early May. Meanwhile, the Defence Secretary said more than 14,000 Armed Forces personnel have been involved in the battle against Covid so far.

The figure includes 800 deployed to Greater Manchester to aid community testing and 1,600 military medics working in the NHS. Around 50 medics have been sent to NHS trusts in Essex and Kent where pressure has been particularly high.

More than 300 personnel are helping the vaccine rollout in England. Chief of the Defence Staff, General Sir Nick Carter said: “These are really challenging times.