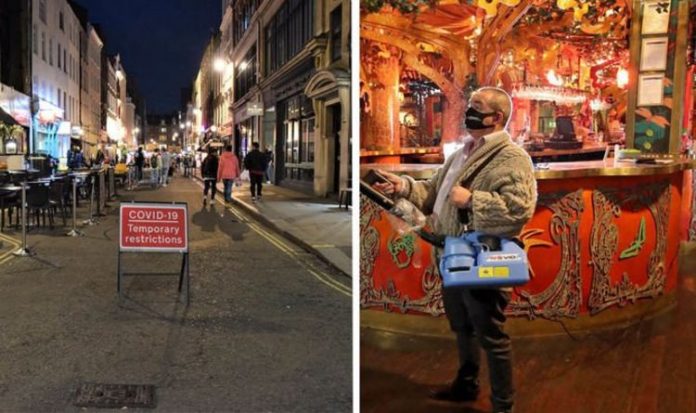 People are socialising, eating out and travelling less, according to the latest weekly report on the social impact of the pandemics by the Office for National Statistics. The figures emerged as 6,968 new cases of the virus and 66 deaths were recorded yesterday. The percentage of adults who left their home to meet up with family and friends in their homes dropped to 20 per cent in the week September 24 to 27. This was down from 30 per cent from just the week before.

The Government introduced the “rule of six” in a toughening up of Covid-19 restrictions on September 22.

Three quarters of people (74 per cent) are now worried about the impact of the coronavirus on their life.

That is the highest proportion since restrictions started easing Positivity at the end of May, when it was 67 per cent.

And seven in 10 adults (67 per cent) strongly support or tend to support the new “rule of six” measures.

Six in 10 (58 per cent) reported understanding the restrictions as very simple or simple.

The latest figures from Public Health England showed 42,268 people have died of coronavirus since the start of the pandemic.

Professor Yvonne Doyle, medical director at PHE, has described the rising number of new cases of Covid-19 as “a stark warning for us all”.

She said positivity rates had risen across all age groups, while rates of admission to hospital and critical care were increasing.

Prof Doyle said the public should follow the new measures announced by Mr Johnson to help control the virus.

She also recommended that people in England and Wales should download the new NHS Covid-19 tracing app intended to alert people if they have been near an infected person, saying it was “the fastest way of knowing when you’re at risk”.

Among people who are meeting up with others from outside their families, 82 per cent always abide by social distance rules.

Meanwhile, the number of adults commuting to work has dropped to 59 per cent from 64 per cent the week before (September 16 to 20).

There were also reductions in the percentage of adults meeting people in a public place and eating or drinking at a restaurant, cafe, bar or pub.

Around 43 per cent said they were very comfortable or comfortable about eating indoors at a restaurant, compared with 46 per cent a week earlier.

However, this is still double the 21 per cent going out when the hospitality sector first started to reopen in England between July 2 to 5, found the ONS survey of 2,200 people aged 16-plus.

Around 43 per cent of people said they were uncomfortable going out (Image: Getty)

Despite the threat of campus lockdowns and the cancellation of freshers’ weeks, when it comes to university, 67 per cent of students worry more about the quality of education they are likely to receive than anything else.

Meanwhile, the proportion of young women experiencing very high levels of life satisfaction and happiness and very low levels of anxiety fell in the five years up to the pandemic, a study of wellbeing indicators has found.

We would prefer to cycle in high winds and driving rain than risk catching the virus on public transport, a study shows.

Britons have taken to cycling to avoid transport (Image: Getty)

When the country went into lockdown, 78 per cent of adults took to a bicycle for exercise, researchers found. And they say two in three are prepared to brave bad weather in the autumn and winter rather than risk travelling on a bus or train.

Londoners are most likely to chance the elements, followed closely by the Welsh (72 per cent) and residents of Northern Ireland (71 per cent), according to the survey of 2,000 for Raleigh cycles.

The study also found that 67 per cent of adults say the air has been cleaner during the pandemic and they don’t want to return to pre-Covid pollution levels.

Raleigh managing director Lee Kidger said: “This isn’t just people taking their bikes out for a Sunday ride, it’s a choice to embrace cycling as a new, everyday mode of transport for the long term.

“The benefits are huge bike use, in future, would be better for public health.”