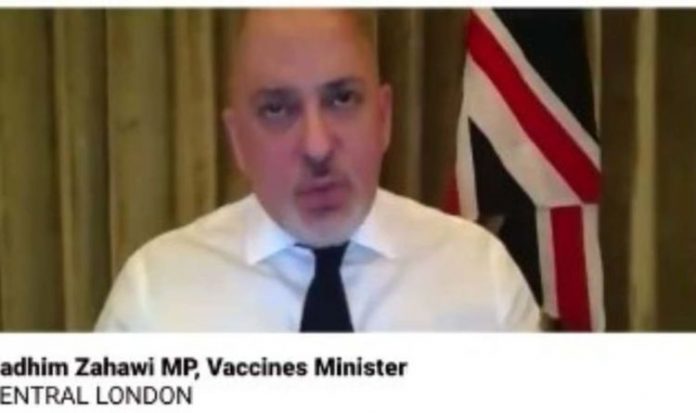 Nadhim Zahawi promised those who received a jab in December or early January will get their second dose of the vaccine in March. Mr Zahawi said he hopes to vaccinate the top four vulnerable groups by mid-February meaning 13.9million Brits will get the coronavirus jab. This is despite Dominic Raab refusing to guarantee people would get their top-up dose within 12 weeks of their first in an interview earlier this week.

LBC’s Nick Ferrari quizzed the Vaccine Minister and said: “Your colleagues are working flat out to give everyone the first dose, will they get a second dose and, if so, when will that timetable be, minister?”

“We will start second vaccinations by March for those people who had it in December and early January, and we’ll keep going.”

But Mr Ferrari then pointed out: “You’re more determined than perhaps your colleague Dominic Raab was yesterday. There seems to be a slight grey area with the foreign secretary on that one.”

Mr Zahawi responded: “The foreign secretary had to field a lot of questions about a lot of stuff, I am the vaccines minister…”

The LBC host however interrupted to add: “You keep telling yourself that every morning when you wake up!”

The radio presenter quizzed the vaccine minister on progress and asked: “Can you keep it up?”

The Conservative MP replied: “Absolutely we can keep it up, you’ve seen another ten national vaccination centres opening up which brings us up to 17. We’ll have 50 by the end of the month.

He bit back and said: “My target is that mid-February number, if I start giving commentary week-by-week on unaudited data you know where this conversation will end up.

“You’ve been in this game longer than I have and know it is an unwise place to be to start making predictions.”

Mr Ferrari laughed off the remark saying it was “well batted back, almost as good as the England cricket team”.

He then asked about vaccine clinics and the news that some of them would operate 24 hours a day.

The minister told him: “We are piloting 24/7 clinics in hospitals, that will be the end of this month”