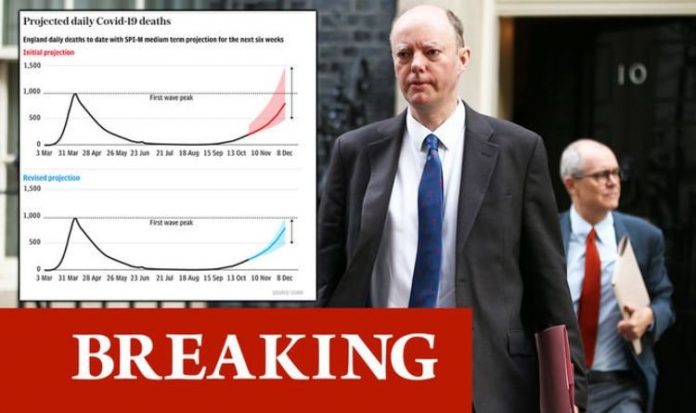 Today the country has gone back into a second national lockdown as cases of the novel virus continue to rise. But official projections have been quietly revised to no longer suggest deaths could soon overtake those in the first wave peak.

On Saturday, graphics revealed during the Downing Street press conference suggested the UK would see up to 1,500 deaths a day by early December.

This is far higher than the numbers seen during the first outbreak of the deadly virus back in Spring.

However, government documents show the figures were far too high and have been “amended after an error was found”.

This amendment comes after MPs voted to impose the new lockdown restrictions yesterday.

READ  War widows’ pension fight backed by Lords ‘Are No 10 waiting for them to die?’ | UK | News (Reports)

The forecast now predicts around 1,000 deaths per day by December 8 – a figure on par with that in April.

Just days after Sir Patrick Vallance presented a “very grim picture” in the fight agains the virus, the Government Office for Science corrected two of the slides.

Now the figure has been cut to 6,000 in the updated slides.