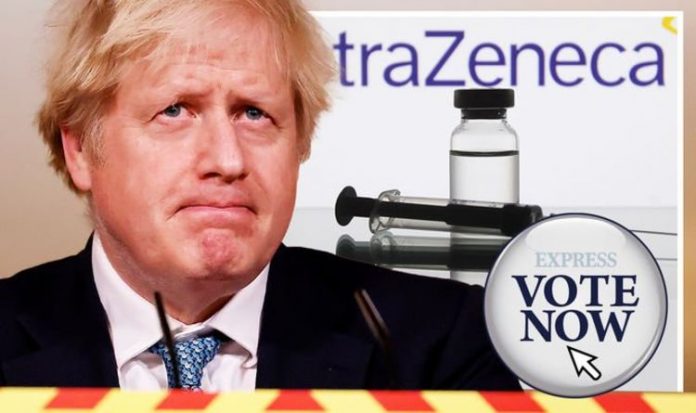 New analysis from three trials found the first shot of the vaccination provided up to 76 percent protection against symptomatic infections from three until 90 days. It has also been found to reduce transmission of the disease by 67 percent.

While the findings are still preliminary and under review at The Lancet, if found to stand up to scientific scrutiny it would be a breakthrough in the battle against the virus.

The Oxford/AstraZeneca vaccine was approved by the UK’s Medicines and Healthcare products Regulatory Agency back in December.

England is currently in its third national lockdown, which was imposed last month.

Express.co.uk is asking: “After vaccine boost, should Boris fast-track the end of the UK lockdown?”

Today, Health Secretary Matt Hancock said the latest analysis would “help us all get out of this pandemic”.

Of the reassuring news, Mr Hancock tweeted: “This is a hugely encouraging study and further reinforces our confidence that vaccines are capable of reducing transmission and protecting people from this awful disease.

“This report shows the Oxford vaccine works and works well.

“More than 9.6 million people have already received the first dose of their Covid-19 vaccine and the NHS is working tirelessly to vaccinate as many people as possible in every part of the UK.”

READ MORE: Oxford vaccine could cut transmission of Covid by more than 60 percent

“The indication that virus carriage is reduced is also very encouraging.”

Stephen Evans, professor of pharmacoepidemiology at the London School of Hygiene and Tropical Medicine, said the extra data on the AstraZeneca vaccine is “very helpful”.

He said: “The data definitely provides some evidence to suggest that the eventual protection from two doses of this vaccine are not worsened by having a longer than 28- or 42-day period between doses and tend to confirm what had been shown before, that if anything the eventual efficacy was better.

“The data also do not provide any evidence that efficacy wanes after the first dose.”

Dr Gillies O’Bryan-Tear, the former chair at the Faculty of Pharmaceutical Medicine, said: “If the effect on transmission is confirmed for the Pfizer vaccine too, this would be very positive.

“If these vaccines reduce transmission to the extent reported, it will mean that the easing of social restrictions will be enabled sooner, than if we have to wait for herd immunity – which may never in fact be achieved because of insufficient vaccine population coverage.

“That would be the holy grail of the global vaccine rollout, and these data bring us one step closer.”

However, Azra Ghani, professor of infectious disease epidemiology at the Imperial College London, warned caution over the results.

This news comes as France’s health advisory body has claimed the vaccine should only be used on people under 65, citing a lack of data.

The vaccine was approved by the European Medicines Agency last week.