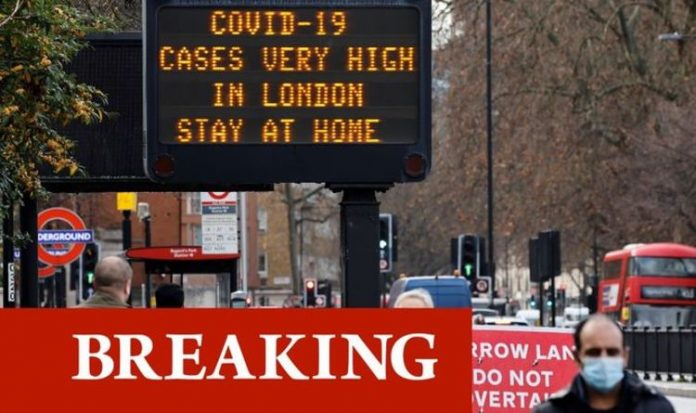 The UK has been one of the worst hit countries during the pandemic and over the weekend the Government announced a new virulent strain of the virus, sparking international fears.

And now, data from the ZOE Symptom Tracker app has claimed the R rate is now at 1.3 in England and Wales and 1.1 in Scotland.

The R number is a way of rating coronavirus ability to spread and is the number of people that one infected person will pass on a virus to.

The app also revealed there are currently 38,719 daily new symptomatic cases of the novel virus.

Under the new restrictions, people have been banned from entering or leaving regions in the highest tier in a bid to stop the spread of the virus.

Professor Tim Spector, of King’s College London, said: “This new virus strain is being blamed for the recent surge in London and the South East, but while it is definitely becoming the dominant strain in new infections, there’s still no hard evidence yet to support that it is acting differently.

“It is possible that these rapid changes would have happened anyway, just as they have done in Wales which has four times the national rate.

Professor Spector added how testing alone would not stop the spread of the virus.

He said: “People need to know all the symptoms and not just focus on the three ‘official’ symptoms that miss over 20 percent of cases.

“Headache, fatigue, diarrhoea, muscle pain, skipping meals and confusion are just some of the other symptoms associated with COVID-19.

“If anyone is suffering from any of these over the coming weeks, stay at home, self-isolate and get a test.”

Scotland’s First Minister Nicola Sturgeon warned the public not to be complacent as the R number remained at one.

She said: “We will shortly publish the latest estimate of the R number.

“We expect that it will show that the R number is still around one in Scotland but that is of course a concern given that it is thought that the new variant of Covid could raise the R number by 0.4.”

“Progress on vaccination gives us grounds for hope but the overall state of the pandemic is a cause of concern,” she added.

“Our immediate priority has to be to get through the next few weeks and month as safely as possible.”

It is understood the new strain of the virus spreads 70 percent quicker than the original and has been detected in Kent and London.

New data from the Office of National Statistics (ONS) revealed the proportion of the new variant is increasing in London, southeast and the East of England.

The new figures were revealed during a press conference at Downing Street on Saturday.

Professor Chris Whitty, chief medical officer for England, said the World Health Organisation has been informed of the rapid spread of the new variant.

In a statement, Mr Whitty said: “There is no current evidence to suggest the new strain causes a higher mortality rate or that it affects vaccines and treatments, although urgent work is under way to confirm this.

“Given this latest development, it is now more vital than ever that the public continue to take action in their area to reduce transmission.”