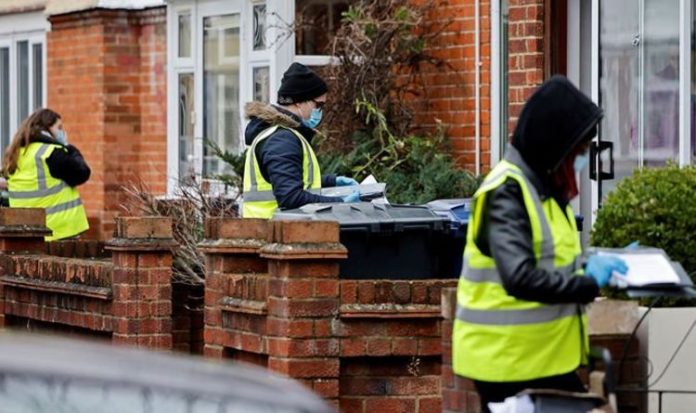 Surge testing will take place in a number of new areas across Britain as authorities attempt to get a grip on rising numbers of new Covid variants. Door-to-door testing was announced earlier this month as a response to multiple cases of the South African and UK coronavirus variants being recorded around the country. Express.co.uk has compiled a full list of all postcodes where surge testing will be conducted after new areas were today added.

Further Covid testing is being deployed in Lambeth, south London, where the South African variant has been found.

The surge testing and genomic sequencing will be conducted in the SE27 0, SE27 9 and SW16 2 postcodes.

This type of testing is aimed at helping officials understand the new and emerging Covid variants better and adjust measures to prevent the spread of the variants.

People living within these areas are being urged to take a Covid-19 test this week, whether they are showing symptoms or not.

Specifically, areas across the country are being targeted where the South Afri variant and new mutation of the Kent variation have been detected.

More than 10,000 tests are being deployed in Manchester after cases of the Kent variant were found in two unconnected households.

A virus threats advisory group has classed a mutation of the Kent COVID strain found in Bristol as a “variant of concern”.

There have been 14 cases in Bristol, four cases in Manchester, and three other scattered cases.

Meanwhile, a mutation identified in Liverpool has been classed as a “variant under investigation”.