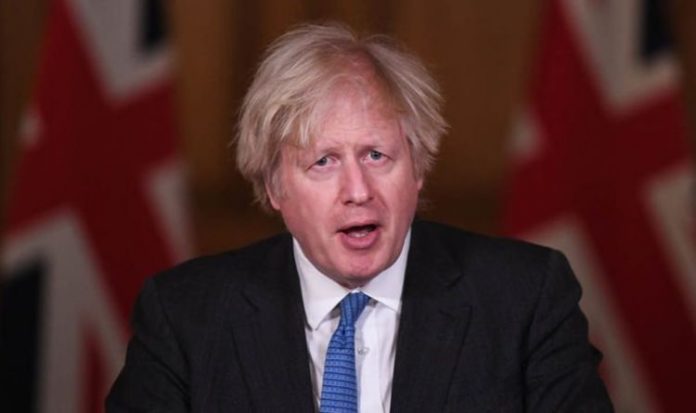 There are fears that many restrictions could still be in place over the summer as the Government’s more hardline scientific advisers push to maintain them. Many MPs have told the Prime Minister that the public mood is changing over lockdown and that Boris Johnson cannot delay too much. But as the vaccine drive is ramped up, he has made it clear he will take a cautious approach.

He said: “We will now aim to offer a jab to every adult by the end of July, helping us protect the most vulnerable sooner, and take further steps to ease some of the restrictions.

“But there should be no doubt – the route out of lockdown will be cautious and phased, as all continue to protect ourselves and those around us.”

It is anticipated that the new rules revealed tomorrow will allow two households to meet outdoors, regardless of the total number of people, from April, while six people from six different households would also be able to gather.

It was also reported that pubs could be permitted to serve outdoors from April and indoors in May, although Downing Street has dismissed this as speculation.

Schools are expected to reopen from March 8, although a coalition of education unions and professional bodies have warned a full return of pupils would be “reckless”.

There were 445 deaths and 10,406 new virus cases reported yesterday, a drop of 28 percent and 19 percent in seven days. However, one of the deaths was of a 16-year-old with no underlying health conditions.

Though Mr Johnson has urged caution in reopening the country, MPs, including the chairman of the 1922 Committee Sir Graham Brady and former cabinet minister Esther McVey, have warned of the damage lockdown is causing.

Their concerns follow a letter from 63 members of the Covid Recovery Group of Tory MPs last week, which demanded all restrictions are lifted by the end of April when all vulnerable groups have been offered the jab.

But a Downing Street source said it would be wrong to link the easing of restrictions solely to the rollout of the vaccine. The source said: “We have to see how effective the vaccines are and what effect they have on transmission. We don’t have enough data yet.

“It is more nuanced than just the rollout of the vaccine and we have to take other issues into account.”

The source added: “We could get to a point where legal restrictions are lifted, but we need to offer guidance on things like mask wearing and washing of hands and so forth.”

The Government, which held a private briefing of MPs on Friday, now feels confident initial targets on the vaccine can be brought forward.

Esther McVey has warned of the damaged lockdown is causing (Image: Getty)

It is believed that the arrival of the third vaccine, Novavax, on top of the jabs from Pfizer and Astra-Zeneca, will mean far more people can be vaccinated in a week, with the NHS offering a first dose to all adults by the end of July instead of by September.

It also means that the offer of a first dose to all adults over 50 can be accelerated to April 15.

Last week, the NHS moved to the next phase of the programme, with people aged 65 and over and an expanded group of at-risk people now receiving the jab.

At the same time, anyone over 70 who has yet to receive theirs can contact their GP, book a slot online, or call 119.

NHS England chief executive Sir Simon Stevens said there are “early signs” the rollout is contributing to the fall in virus hospitalisations.

He said: “Across England overall nearly a third of adults have now had their first jab, and early signs suggest this is contributing to the welcome fall in hospitalisations.”

With the vaccine drive going so well, the focus is shifting to lockdown and Mr Johnson’s next moves.

The NHS has moved to the next phase of the vaccine programme (Image: Getty)

Writing for the Sunday Express, Sir Graham Brady, warned that a slow, cautious approach to lifting restrictions would be particularly harmful to Generation Lockdown, Britain’s youngsters.

He called on the Prime Minister to give them hope. He said: “Those who advocate the slowest release from lockdown claim that they are acting cautiously.

“But caution to protect some peowe ple may come at the expense of recklessness with the lives and prospects of others. If we are to halt the epidemic of mental illness and hopelessness we have inflicted on the young, we need to act quickly .”

Ms McVey also highlighted the problems for children and parents, with schools expecting to open on March 8.

She said: “I’m working with parents trying to get schools reopened as they see the strain and the serious negative impacts of lockdown on their children, and business owners who have gone for nearly a year without earning and are holding on to their business by their fingertips.

“They all need some hope from Boris and need to know their lives and livelihoods can start up again sooner rather than later.”

Parents worry about the impact of the lockdown on their children (Image: Getty)

He said: “Nobody in government, Sage or Public Health England is offering to sacrifice their jobs or salary to pursue this overly cautious strategy, they are just expecting millions of others to do that.

“Perhaps those making decisions should have to forfeit at least 20 percent of their salary while restrictions are in place. I suspect we would get them lifted much quicker.”

He said: “The enforceable law should be removed the moment hospital admissions are at an acceptable level. I would be expecting that to be by mid-March.”

Even MPs who have been government loyalists have raised concerns. Peterborough MP Paul Bristow said: “As the PM said, if you remove 99 percent of the chances of death as a result of this then it points towards us being able to open up more ambitiously.”

Meanwhile, with pubs and restaurants closed and facing an uncertain future, the Countryside Alliance’s UnlockInn campaign has received widespread support.

Emma McClarkin, of the British Beer & Pub Association, said: “We need clarity on when we are going to be able to open and how we are going to be commercially viable. We need to be trusted to do what we do best as part of the solution.”