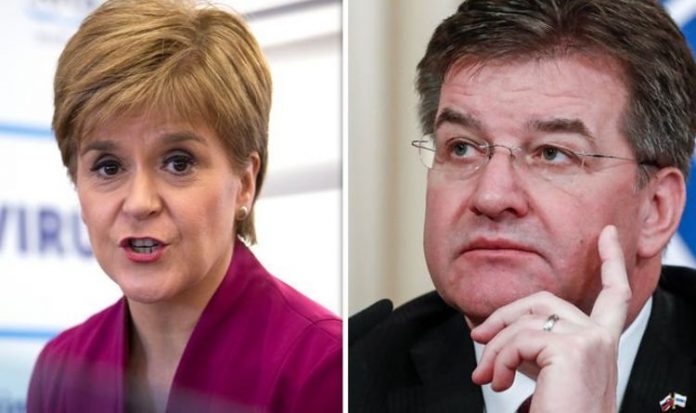 European Commission President Ursula von der Leyen has ruled out allowing Scotland to stay in the EU’s Erasmus+ student exchange scheme following Britain’s decision to leave the programme after Brexit. At least 145 MEPs had signed a letter in January asking the Commission for a fix to allow Scotland and Wales to rejoin Erasmus+, citing a “pronounced aspiration” from the devolved administrations. Northern Irish students have been allowed to continue to participate in the EU programme thanks to Irish government funding.

Ms Von der Leyen said that Mariya Gabriel, the EU Commissioner for Education and Research, had met with her Scottish counterpart Richard Lochhead, who was “keen to explore options for Scottish participation”.

However, in her response to the MEPs, released on Monday, the Commission President said the only way for a nation within the UK to participate again is for the country to associate with Erasmus+ “as a whole.”

The decision is without a doubt a huge blow for the nationalists, who hope to rejoin the EU after winning a second independence referendum.

If Scotland were to become independent, it would border a non-EU country, likely requiring infrastructure and border checks between regions whose communities are deeply intertwined – similar to the problem of the Irish border that severely complicated Brexit talks.

Scotland could also be rejected by Brussels due to its current deficit of seven percent of GDP, unless it adopted a strict austerity programme from the EU as well as potentially accepting the euro.

Moreover, new members can only be allowed into the bloc through a unanimous vote from the existing member states – and Holyrood would undoubtedly ruffle feathers if it were to join.

Even Slovakia’s former Deputy Prime Minister, Miroslav Lajcak, whose country split from Czech in 1993, admitted in 2013 that the future of an independent Scotland within the European Union was uncertain and not a given.

At the time, the Scottish Government was insisting that rather than applying for EU membership, an independent Scotland could negotiate terms from within the EU.

Mr Lajcak said the possibility of Scotland becoming independent was “not for us to judge”.

However, when asked whether a new country would continue as a member of the EU, Mr Lajcak said: “As far as I know there is a discussion about exactly this issue going on in Brussels.

“There is no clear answer.

“There should be an evaluation of the readiness… but in the end it’s a political decision made by all the member states.”

Mr Lajcak said that when Slovakia came into existence in 1993, “many people were sceptical about the chances for us to exist, let alone prosper”.

But he added: “Right now everybody acknowledges we have been a success story.”

His comments were seen as a huge blow at the time, as the experience of the “Velvet Divorce” between Slovakia and the Czech Republic is often cited by Scottish independence advocates as a possible model for their own breakup with Britain.

JUST IN: Orban’s radio ban may spark fresh calls to kick Hungary out of EU

In an exclusive interview with Express.co.uk, Italian MEP Marco Campomenosi reiterated that the chances of an independent Scotland joining the EU are very low.

However, he revealed how, in order to disrupt internal politics in the UK, Brussels did court Ms Sturgeon at the beginning of the Brexit talks.

“During the withdrawal agreement talks, the former President of the European Commission Jean-Claude Juncker was courting the Scottish nationalists, making them believe they were welcome in the EU.

“It was only done to destabilise the UK Government.

“Brussels could not have had the same attitude towards the Catalans because Spain strongly supports the European Commission.

In another interview with Express.co.uk, Lord David Owen echoed Mr Campomenosi’s claims, adding that there might be another country that would almost definitely block Scotland’s entry: Belgium.

The former Foreign Secretary and SDP co-leader said: “I think we should start moving towards a different attitude to Scotland.

“If they really want to leave, eventually, they must be allowed to leave.

“But they must face up to reality and have a proper and honest debate.

“Are they going to be allowed in the EU?

“Will Spain? With all the problems they face in Barcelona…

“You know, there are five European countries that still do not allow Kosovo to become independent. They are afraid of legitimising the separation from countries.”

The peer added: “And let’s not forget Belgium.

“They sit on a very uneasy arrangement between two parts of Belgium, and they are not going to legitimise the splitting of a country.

“Once you allow it, you open up a can of worms.”