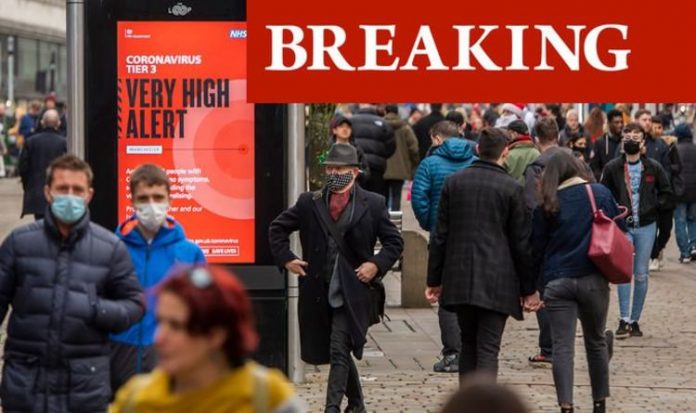 The Government said a further 691 people had died within 28 days of testing positive for Covid-19 as of Tuesday, bringing the UK total to 68,307. Separate figures published by the UK’s statistics agencies for deaths where Covid-19 has been mentioned on the death certificate, together with additional data on deaths that have occurred in recent days, show there have now been 84,000 deaths involving Covid-19 in the UK.

It said that, as of 9am on Tuesday, there had been a further 36,804 lab-confirmed cases of coronavirus in the UK.

Earlier today, NHS England said a further 405 people who tested positive for coronavirus have died in hospital in England, bringing the total number of confirmed deaths reported in hospitals to 46,983.

Patients were aged between 26 and 100. All except 13, aged between 54 and 90, had known underlying health conditions.

The deaths were between July 2 and December 21.

Twenty other deaths were reported with no positive Covid-19 test result.

The rise in cases over recent weeks caused Prime Minister Boris Johnson to put London and parts of the South East into Tier 4 restrictions, meaning lesuire and hospitality businesses were forced to close over the festive period, due to a new mutant strain of covid being found in these areas.

But the new restrictions lead to a domino effect of EU members states closing their borders to the UK including France, Germany and Belgium.

The most dramatic action came from France, which closed its border to lorries crossing the Channel, leading to more than 1,500 HGVs being trapped in Kent.

The EU-wide approach recommended by the commission would allow essential travel, and transit of passengers should be facilitated.

Flight and train bans “should be discontinued given the need to ensure essential travel and avoid supply chain disruptions”, the commission said.

But “at the same time, blanket travel bans should not prevent thousands of EU and UK citizens from returning to their homes”.

Transport commissioner Adina Valean said: “Within the EU, it is crucial that transport workers are exempted from any restrictive measures.”

Talks between the UK and France to resolve the crisis at the Channel have included discussions on testing HGV drivers.

The EU’s recommendation suggested rapid tests should be used to avoid disruption.