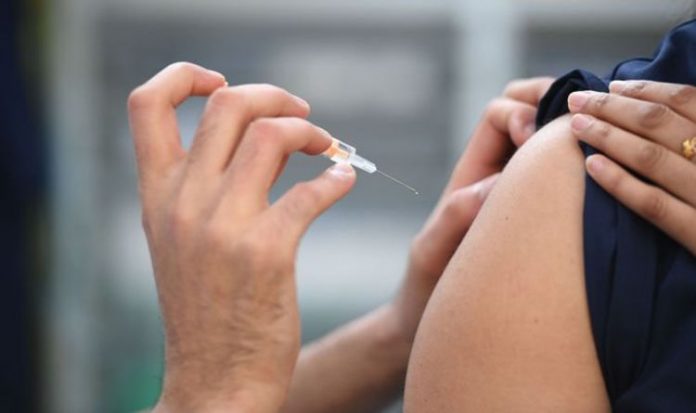 Whitehall insiders were said to be growing more optimistic about the pace of the rollout, with more than 9.6 million first doses administered. Some believe there is a realistic prospect that by the start of May every adult might have been offered their first jab, Sky News reported. Speaking before the figures were updated, Health Secretary Matt Hancock was cautiously optimistic and stressed that the programme was on track but not ahead of schedule.

He told the Commons: “Our vaccine rollout continues at pace. With each vaccine we administer, we are one step closer to normal.

“We have vaccinated 9.2 million people and I want to thank everyone involved in this collective national effort that saw nearly a million people get vaccinated last weekend alone or, put it another way, one in 60 of all of the adults in the UK.

“We have now protected almost nine out of every ten people over 80 and half of people in their 70s. And I’m delighted that we have been able to visit every eligible care home – 10,307 in total.”

Shortly after Mr Hancock had addressed MPs, the Government said the total of first vaccinations had increased to 9,646,715 – with 496,796 people having a second jab.

Whitehall insiders are said to be more optimistic about the pace of the rollout (Image: Getty )

Around 53 million adults need to be inoculated and Government figures show the seven-day rolling average for first doses delivered per day is around 400,000.

If the pace is maintained, all adults could receive a first dose by late May.

This does not factor in the need to deliver second doses within 12 weeks of the first. The Government delayed second doses to help more people receive partial protection, but from next month the total of second jabs will need to rise significantly.

Mr Hancock said the Government was confident it would have the supplies to meet its target of offering a first injection to the top four priority groups by February 15.

More than 9,646,715 people in the UK have received their first dose of the vaccine (Image: Getty)

The Government had said all adults should be offered a vaccine by September but if the rollout is ahead of schedule the next priority group, people aged 65-69, could be invited for appointments from next week.

No 10 said that decision was for “individual hospitals and GPs”.

The Prime Minister’s spokesman said: “The priority is to ensure that we vaccinate all those who are in the top four groups by February 15.

“Then the next step after that will be to ensure not only that those in the top four groups receive their second dose within 12 weeks but then continuing the rollout of the vaccine to the rest of the phase one cohort.”

Small numbers of people aged 65-69 have already been invited to be given the jab. This has been in some areas which have vaccinated higher priority groups but still have spare doses.

NHS England declined to comment on when eligibility would be extended to everyone in that age group.

The Government says all adults should be offered a vaccine by September (Image: Getty )

Chris Hopson, chief executive of NHS Providers which represents hospital trusts, said the UK had made great strides in protecting the most vulnerable.

He said: “The rapid rollout of the vaccination programme is a key weapon.

“It’s brilliant that nearly ten million people across the UK have now received their first vaccination.

“This is a fantastic achievement and testament to the hard work and commitment of staff in trusts who have been at the forefront of the vaccination programme.”

Mr Hopson said that the NHS had overcome several challenges to accelerate deployment in recent weeks, including “the rapid establishment of a complex, logistical operation covering the entire nation, short-notice changes to the expected vaccination dose delivery schedule and countering unhelpful and untrue disinformation about the vaccines circulating amongst some communities.

“The next phase of the vaccination rollout will be ensuring that the rest of the priority groups set out by the Joint Committee on Vaccination and Immunisation are protected as quickly as possible.”

Heartbreak as deaths at April levels

THE weekly death toll of care home residents with Covid is at its highest rate since April in an “utterly heartbreaking” scenario.

A total 2,364 were lost in the week ending January 22 in England and Wales, the Office for National Statistics said.

This is up 37.5 per cent from the previous week and the highest weekly number since the week ending May 1.

The Daily Express campaign for a dedicated Minister for Older People was backed as a way of preventing such a crisis.

Age UK’s Caroline Abrahams said: “It is devastating that so many older people are dying.

“It’s particularly tragic given how well we are doing in rolling out the vaccine.

“Care homes were dangerously exposed to the virus early on, something that might have been avoided had there been a Minister or Government unit leading on policy for our older population.

“With no one in the corridors of power to speak for them older people get overlooked.”

Our crusade has been backed by Silver Line founder Dame Esther Rantzen, experts at Care England and the Independent Care Group, which called the death toll alarming.