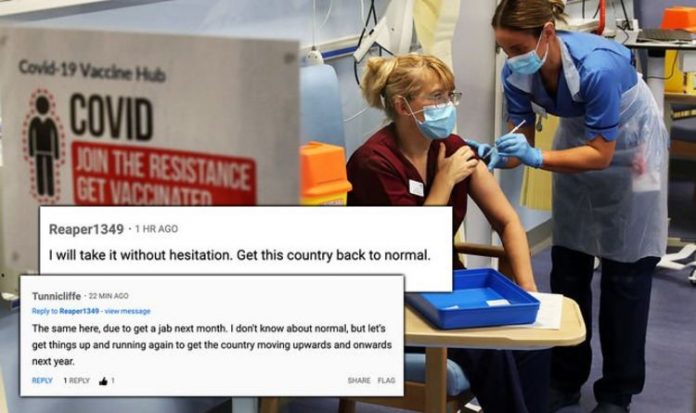 The Health Secretary announced this afternoon that the UK has 530,000 doses of the jab available from Monday. It comes as the Government reported another 981 deaths from the virus in the last 24 hours. Mr Hancock also said three-quarters of England’s population would be in the top tier of restrictions from 12.01am on Thursday, covering 44.1 million people.

He added that the Oxford vaccine means the day on which restrictions are lifted can be brought forward.

He told MPs in the Commons: “It brings forward the day on which we can lift the restrictions that no-one in this House wants to see any longer than are absolutely necessary.

“But we must act to suppress the virus now, not least because the new variant makes the time between now and then even more difficult.

“And so whilst we have the good news of the vaccine today, we also have to take some difficult decisions.”

Express readers were asked between 1.56pm and 5.28pm today whether they would be happy to receive the Oxford-AstraZeneca vaccine.

Only 888 voters (19 percent) would not be happy to receive the jab.

And 140 people (three percent) did not know.

The Government reported another 981 deaths from the virus in the last 24 hours (Image: APESTER)

Many readers also shared their reasons for wanting to take the vaccine to get the “country back to normal”.

One person said: “I will take it without hesitation. Get this country back to normal.”

Another agreed: “The same here, due to get a jab next month.

“I don’t know about normal, but let’s get things up and running again to get the country moving upwards and onwards next year.”

A third added: “You bet I will be happy to accept the jab, in fact I shall do a dance for joy after the needle has gone in.”

And a fourth reader simply said: “The vaccine is the only way forward.”

The Government said it would not recommend one vaccine over another for different cohorts of the population, even though data on the AstraZeneca/Oxford shot’s efficacy in older people is currently limited.

Jonathan Stoye, a virologist at the Francis Crick Institute, agreed that questions remain about the real efficacy of the vaccine, how well it works in older people, and what data exists to support the change in dosage interval.

The Oxford vaccine means the day on which restrictions are lifted can be brought forward (Image: EXPRESS)

“In light of the sharply increasing number of cases, the approval… is tremendous news,” he said. “However, the reported news does leave unanswered a number of important questions, particularly regarding the longer term.”

Speaking during a press conference at Downing Street, Prime Minister Boris Johnson said: “We have to face the fact that we’ve got two big things happening at once in our fight against Covid – one’s working for us and one’s working against us.

“On the plus side we have got two valid vaccines, and we’re racing to get them out – and on the bad side there is a new strain of the virus which is spreading much faster and surging across the country.”

Referring to the new tier measures announced by Health Secretary Matt Hancock, Mr Johnson said: “At this critical moment, with the prospect of freedom within reach, we’ve got to redouble our efforts to contain the virus.

“No-one regrets these measures more bitterly than I do, but we must take firm action now.”

He said of the decision to delay school re-openings: “We must face the reality, the sheer pace of the spread of this new variant, requires us now to take even tougher action in some areas, and that does affect schools.”

Case numbers have risen sharply in Britain in the last two weeks.

Mr Johnson was forced to cancel an easing of the rules over Christmas after a new strain that is up to 70 percent more transmissible than the original was discovered.