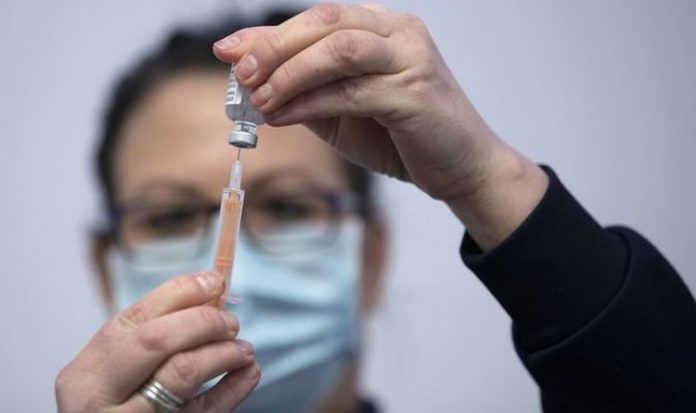 Anthony Brookes, professor of genomics and health data science at the University of Leicester, said “fearful” talk of mutated coronavirus running amok should stop. He added that the viral evolution was to be expected and could be dealt with. Other experts suggested that the new variants, whether Kent, South African or Brazilian, were “being used as a stick to beat the public with – it’s a political thing”.

Scientists first raised the alarm over new variants in December after the discovery of a Kent variant in September which was said to be 70 percent more transmissiwould ble by scientific modellers.

This modelling was instrumental in the justification of a third lockdown as well as the cancellation of the lockdown break over Christmas.

Since then others have been found, including South African and Brazilian. These have led to fears of greater transmissibility, lethality and possible resistance to vaccines.

A new border policy aims to prevent new variants being introduced, with hotels being prepared to quarantine travellers from highrisk countries. But Prof Brookes said while mutations may slightly modify the target for the immune system, they would not render vaccines ineffective.

He said: “I use the analogy of a series of 10 bottles side by side on a shooting range, where each bottle is a different portion – known as epitope – of the virus.

Your gun, ie your immune system, is targeted at those bottles. What we have seen with these mutations is what evolutionary biology is all about and happens all the time.

The South African and Brazillian variants have led to fears of possible resistance to vaccines (Image: Getty)

The reason for this, he said, was that the immune system looked at the virus as a whole. This meant even if one or a few portions had mutated, your antibodies and immune system cells would still be able to identify it as a threat.

He added: “Vaccines produce a copy of the spike protein of the virus and your immune system doesn’t just target one part of this, it targets all of it.

“When your immune system reacts to it some pieces – epitopes – are disregarded whilst others provide good targets. The worst a significant mutation will do is slightly hide one of those epitope targets from your immune system.

“To mutate so much that it would not be recognisable anymore to an immune system primed by a natural infection or a vaccine, it would basically constitute a completely different virus. This just wouldn’t happen.

“I doubt that any virus has ever mutated so much during an epidemic in humans that vaccines or natural immunity would completely not work.”

Other experts said that even an extreme mutation could be tackled by a tweaked vaccine.

Prof Brookes said he was “worried” there has been “unnecessary paranoia” around the variants.

He said: “We need to stop this. We have petrified a generation. Yesterday I saw an old lady with gloves and masks who went to get her shopping.

Some experts say that an extreme mutation of the virus could be tackled simply by a tweaked vaccine (Image: Getty)

“What world do we want to live in? Are we trying to eliminate the virus or bring death and severity down to normal levels?”

Professor Robert Dingwall, a member of several government advisory groups and speaking in a personal capacity, said: “I am increasingly concerned by the growing impression that any variant of Covid-19 should be a cause for concern and an excuse for maintaining restrictions on everyday life. More than 4,000 variants have been identified since last March.

“Only a handful have shown any effect on transmission or severity. These effects are described in big percentages but their absolute size is very small. The vaccines would still work at least as well as the annual flu jab and their manufacturers are confident they can quickly adjust to new strains.

“Of course we need good surveillance to detect variants but we can safely continue to dismantle social and economic controls as the vaccine programme increasingly protects the population.

These are increasingly unproductive overheads costs for a country that is crying out for public investment to improve infrastructure and create jobs.”

Scientists first raised the alarm over mutations of the virus in December (Image: Getty)

Professor Hugh Pennington, a leading expert on virology from the University of Aberdeen, and part of a team that discovered the first coronaviruses in the 1960s, agreed vaccines should remaineffective. He saida significant change to the virus was a remote possibility, but stressed the UK’s genetic sequencing teams were well placed to spot one.

If that were the case, vaccines could still be “tweaked”.

He said: “Any extreme dramatic change in the coronavirus could not be ruled out, although it has never happened with other coronaviruses. Generally speaking big changes have led to a milder form rather than a more severe form of the disease but obviously we can’t bank on that .

“I don’t think we should panic about the current variations which are “being used as a stick to beat the public with – it’s a political thing”. I have never known a virus escape a vaccine. It would be a world first if it did.”

Clive Dix, chairman of the UK Vaccine Taskforce, was asked if it was possible a variant could evolve to evade vaccines. He said: “Of course, when it will occur and whether it will occur is one thing.