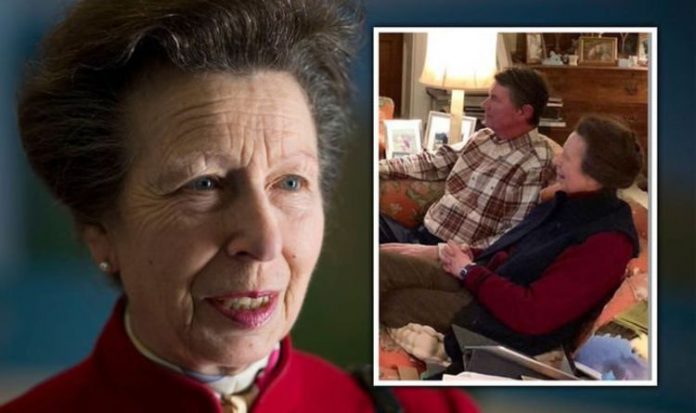 Princess Anne famously values her privacy and is rarely under the spotlight, carrying out much of her royal work behind the scenes and without media presence. However, she recently invited royal fans into her home to celebrate with her and her husband Sir Timothy Laurence the momentous victory of Scotland at the 150th Calcutta Cup.

After Scotland snatched the cup for the first time in 38 years by winning against the English rugby team yesterday, the Royal Family Twitter account shared a celebratory message on behalf of Princess Anne.

The tweet read: “As @Scotlandteam’s Patron, The Princess Royal often supports the team from the stands.

“HRH and Vice Admiral Sir Tim cheered Scotland on from home today as they played England for the Calcutta Cup, 150 years since their first match.

The tweet included a picture of the Princess Royal sitting next to her husband on a couch in her living room.

The couple smiled as they looked at the TV in the cosy room filled with books, statuettes of dogs and horses and paintings.

Royal fans were ecstatic to see the Princess Royal allowing people to take a peep into her home.

One wrote: “I bet Princess Anne is desperate to shout from the rooftops how much she enjoyed that win.

“What a great tweet from the Royal Family, and straight after the game.”

Another said: “I love this!! She’s so passionate about the Scots rugby and is so close with the team this is so sweet.”

And another added: “Absolutely love seeing Princess Anne and Tim so at home, well played Scotland”.

Princess Anne has been the patron of the Scottish Rugby Union for three decades.

While the coronavirus pandemic has made it impossible for sports fans to attend matches in person at the stadium, Princess Anne has signalled yesterday her commitment to the Scottish team is unwavering.

Over the past year, Princess Anne continued to work closely with the hundreds of patronages and associations she supports.

For most of 2020, she was forced to do so remotely, via phone calls and video chats, clips of which have often been shared on Twitter.

This meant people were given the chance to see the Queen’s daughter in her home.

However, the restricted framing of the video calls offered only a few details on the background to curious royal fans avid to catch a glimpse of the house in Gatecombe Park.

On Tuesday, the Princess Royal appeared on video to introduce the winners of the Queen Elizabeth Prize for Royal Engineering 2021.

The royal, who was smartly dressed for the formal occasion, paid tribute to the tech engineers who have been working relentlessly throughout the pandemic to solve issues and help people keep in touch.

The video was filmed at her home, and a few details of the room she was in could be spotted.

Among them, there were cream-coloured curtains and a modern painting.