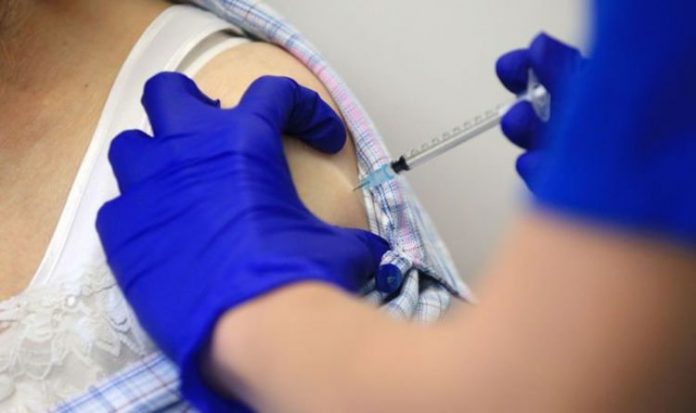 The UK has been one of the worst-hit countries in the world following the outbreak of the deadly virus. Infections have surpassed two million and deaths have reached a staggering 69,051. Last weekend, the Government revealed a more virulent strain of the virus has emerged across London and Kent.

It is understood the new strain of the virus spreads 70 percent quicker than the original.

But now, data from the Centre for Mathematical Modelling of Infectious Diseases found the new strain is 56 percent more transmissible than “preexisting variants”.

The study, which is yet to be peer-reviewed, said: “We were unable to find clear evidence that VOC 202012/01 results in greater or lesser severity of diseases than preexisting variants.

“Nevertheless, the increase in transmissibility is likely to lead to a large increase in incidence, with COVID-19 hospitalisations and deaths projected to reach higher levels in 2021 than were observed in 2020, even if regional tiered restrictions implemented before December 19 are maintained.

“Our estimates suggest that control measures of similar stringency to the national lockdown implemented in England in November 2020 are unlikely to reduce the effective reproduction number Rt to less than 1, unless primary schools, secondary schools and universities are also closed.”

They went on to explain how they project “large resurgences” of the virus are likely to occur and urged to “accelerate the vaccine”.

The report added: “We project that large resurgences of the virus are likely to occur following easing of control measures.

“It may be necessary to greatly accelerate vaccine roll-out to have an appreciable impact in surpassing the resulting diseases burden.”

The UK is currently rolling out the Pfizer vaccine and so far more than half a million doses have been given to patients.

Yesterday, Professor David Salisbury, the former director of immunisation, “strongly urged” the Government to use the current doses on many risk groups as possible.

He told the BBC: “I would be telling people [that if we did this] we are going to be saving more lives.

“I would see my Pfizer vaccine much more aggressively so that I vaccinated as many people as I could with one dose, as fast as I have supplies of that.

“And that, I think in the current circumstances, is a really important thing to think carefully about.”

Department of Health and Social Care spokesperson said: “Our brilliant NHS has vaccinated more than half a million people against COVID-19 using the Pfizer/BioNTech vaccine.

“Over the coming weeks and months, the rate of vaccinations will increase as more doses become available and the programme continues to expand.”

The Pfizer vaccine requires two doses to be administered up to 21 days apart.

Pfizer vaccine rolled out across the NHS (Image: Getty)

But Stephen Evans, professor of pharmacoepidemiology at the London School of Hygiene and Tropical Medicine, warned there is limited amount of data to using just one dose.

He said: “This is not a simple question.

“No trials of the Pfizer/BioNTech vaccine were done using a single dose as the intended procedure, so the amount of data on efficacy of a single dose is limited.

“What is clear is that there is evidence of efficacy in the short term, and it seems likely that the efficacy will not decline notably.

“This efficacy is clearly nearer 80 percent than 90 percent and could be quite a bit lower, but is still good.

“There is a legal difficulty in that the Pfizer/BioNTech vaccine authorisation is for two doses 21 days apart and not for a single dose.

“If JCVI were to go against that authorisation it may create difficulties in legal terms, but this is a pandemic.”