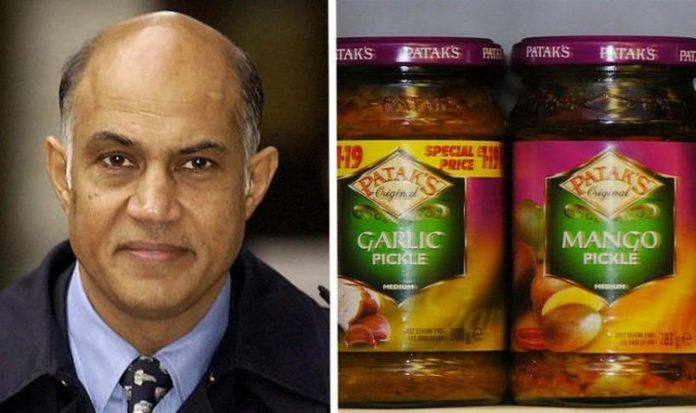 The company was created by his parents Lakshmishankar and Shanta in 1956 after arriving here from Kenya with six children and just £5. Poverty had forced Mr Pathak’s parents to leave their village in Gujarat, western India, in the 1940s and live in Kenya before arriving in the UK. They first settled in Kentish Town, north-west London, where they began their business by selling samosas from their tiny kitchen in the 1950s.

Later, under the control of Kirit and wife Meena, the family firm dropped the “h” in their name and grew to supply 90 per cent of Britain’s 7,500 Indian restaurants. Their cooking sauces, pastes, chutneys and pickles became a hit in over 40 countries.

The booming brand, worth £200million, was eventually moved to Leigh, Greater Manchester, before it was sold to Associated British Foods (ABF) 14 years ago.

“From humble beginnings he and Meena created an incredible business – all built on the concept of making Indian-style meals easy and accessible for time-poor people.

“He and his family revolutionised the way we eat at home.

“He leaves behind a legacy that not only employs hundreds of people but is enjoyed by millions of homes worldwide every single day.”

Mr Pathak, who lived in Bolton before moving to Dubai with Meena, died in hospital on Saturday after the accident.

Together they had two sons, Neeraj, 43, and Nayan, 41, and daughter Anjali, 39, who remains a brand ambassador and consultant.

In 2007, Mr Pathak sold up for £105million but he retained the brand rights in India and then went on to became chairman of ABF’s combined world foods group.

He said he had been a friend for more than 13 years and he would “miss enormously both his good company and wise counsel”.

She said: “After moving to Bolton, they became family friends.

“My heart goes out to all the Pathak family. My biggest hug, though, goes to Meena, who has been his rock since day one. As for Kirit, now an angel, now in heaven, keep smiling and keep joking – that’s how everyone will remember you.”