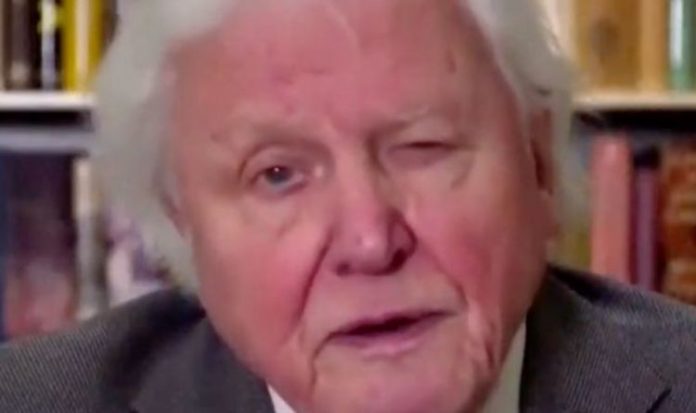 David Attenborough, 95, had viewers “worried” about his health after delivering a special video message to the United Nation’s Security Council. Throughout his speech, Sir David appeared to be struggling to keep his left eye open. Fans quickly took to Twitter to voice their concern about the broadcaster’s health, with one writing: “Sir David Attenborough doesn’t look well it’s worrying me #climatemeeting.”

One said: “David Attenborough speaking at the moment and he really doesn’t look well. Please, lord, wrap him in all the sustainable cotton wool you can find. Nothing wrong with his speaking though.”

Others commended him for his clarity of speech on the threat of climate change, writing: “David Attenborough is captivating. I just cried a little bit.

“Has there ever been a human who had the ability to take people with him to such a degree?”

During his video message to the Security Council on Tuesday, Sir David pleaded for countries around the world to come together to declare a climate emergency.

The broadcaster warned of the “new and unprecedented threats” facing future generations unless action is swiftly taken to help the environment.

Sir David said: “If we continued on our current path, we will face the collapse of everything which gives us security.

Lord Deben highlighted taxes that favour polluters over the environment, including 20 per cent VAT on the sale of electric cars – the same as diesel and petrol vehicles.

He wrote: “The Government must make it easier and cheaper to do the right thing and harder and more expensive to trash nature.”

The peer urged Britain to copy Norway’s tax incentives for electric cars which now account for 54 per cent of sales there.

The Treasury stressed that Mr Johnson’s 10-point plan for his Green Industrial Revolution included £12billion of Government funding for low carbon technologies such as electric vehicles.