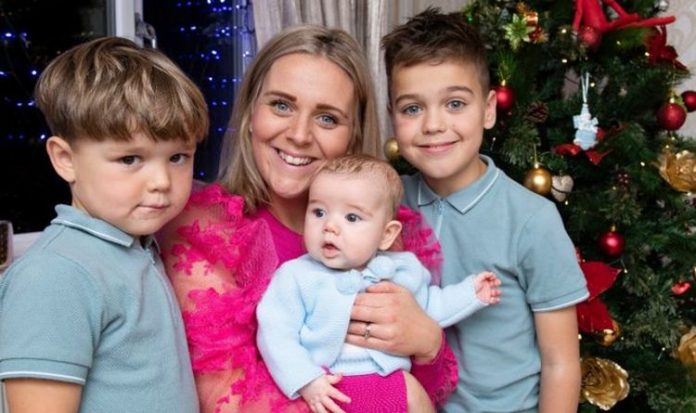 Brothers Jaxson, nine, and Carter, four, have not seen Catherine Rush since March because of Covid lockdown rules. She suffers from dementia and is in a care home. In August their mum gave birth to Brooklyn and while they are excited at the new arrival all they want for Christmas is the chance for them all to hug and hold the woman affectionately known by their family as The Queen.

After nine long months tearful Jaxson had an idea about a man who might be able to help. Taking matters into his own hands he penned a simple but heartwarming note on behalf of his siblings, which read: “To Santa.

“This year I would like to be able to see my great grandma Rush – we have really missed her and want her to see baby Brooklyn. Love from Jaxson aged 9, Carter aged 4 and Brooklyn three-months.”

It has now been popped in the post and was last night winging its way to the North Pole.

The boys’ Mum, Katie Rush-Davis, 30, said: “Now it’s December Jaxson and Carter are terribly excited about Christmas but all they really want is to see their great grandma who they absolutely adore. They understand about Covid but still find it hard to get to grips with exactly why we can’t all just go and see her and have some sort of contact. To them it’s like she’s just not here anymore.

“Jaxson told me he just wished he could see his great grandma and then sat down and wrote a letter off his own back. He’s upset she has not yet had the chance to see baby Brooklyn.”

Former administrative clerk Catherine, 87, raised three children on her own from the age of 33 after her builder husband Thomas died of kidney failure at 36 in 1967.

She was left juggling her job and bringing up three young girls, Christine and Janet. Katie’s mum Jacqueline was born six weeks before her father passed away.

Catherine has been a resident at Abbeywood Care Home in Bury, Greater Manchester, for five years and until the pandemic struck enjoyed daily visits from her family.

But since lockdown they have only been able to see her a handful of times – and only then through a window. It has left them distraught.

Barber Katie, from Bolton, Lancs, said: “They are her world – she loves them so much. To see your grandchildren have children of their own must be so magical.

“She is forgetful and gets confused but when she is reminded she does understand. In her own world she is happy, but we would all just love to be reunited.

“It’s been heartbreaking not to be able to give her a hug or hold her – we have literally just had a couple of window visits and speak on the phone. She has heard about Brooklyn being born, but it’s not the same as seeing him.

“It was my gran’s birthday in October and we had to stand at the care home gate and someone came out to fetch her cards and presents. It was rubbish.”

The boys’ plight is another stark reminder of the heartache being experienced by millions of families with loved ones still locked up in care homes weeks before Christmas.

New visiting guidance is set to be announced by the Department of Health and Social Care this week in an effort to reunite families.

But campaigners have voiced concern they face a postcode lottery as some care homes refuse to open up because they fear the consequences of doing so.

Katie said: “We have a large family and would usually all be very excited about a big get-together at Christmas, but not this year.

“It’s really upsetting for us all. We know we have to follow the rules, but time is pushing on and we wonder whether this is going to be her last.”