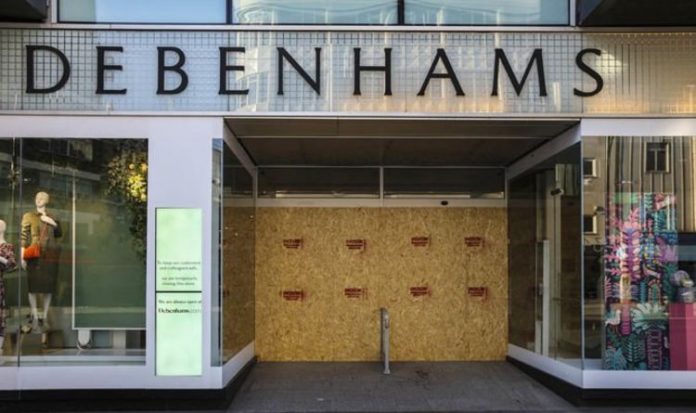 Liquidation would see the single-biggest jobs cull of the coronavirus pandemic. It is understood restructuring firm Hilco Capital was appointed to work on “contingency plans” with the retailer in the event the sale of the business fails. Debenhams collapsed into administration four months ago and had already announced plans to axe 2,500 jobs earlier this week, on top of 4,000 announced since lockdown.

A source close to the company said administrators were required to have liquidators on standby “in the unlikely event that all other options for the business do not materialise”.

Other struggling high street retailers include John Lewis, which has said it will not reopen its £35million Birmingham store and seven others – leading to 1,300 job losses.

The collapse in air travel also led to Leeds-based airliner Jet2 to announce 102 of its pilots are to be made redundant.

It joins other struggling airlines to have announced massive job cuts, including British Airways which suggested 12,000 jobs could be at risk. That figure remains under review and is expected to be reduced.

Tens of thousands of jobs have also been lost across the high street as retailers and hospitality businesses have borne the brunt of the virus crisis.

The news cast a shadow over the latest lockdown easing for a range of leisure businesses.

Indoor theatres, music and performance venues also reopened to audiences provided social distancing rules were met while newly weds can now have up to 30 guests at a sit-down reception.

It was full steam ahead at Nene Valley Railway in Cambridgeshire, where Porter David blew the whistle for the resumption of steam trains to Peterborough.

Beauty therapist Alice Bellamy, 67, who runs a laser hair removal studio in Calne, Wiltshire, was delighted to be able to offer a wider range of treatments again. She said: “I am overjoyed and so are my clients. My phone has been hot, hot, hot.”

Hollywood Bowl reopened 48 of its 61 centres and its chief executive Stephen Burns said: “We’ve been ready to reopen in the fully Government-approved Covid-secure way for many weeks and our trained teams are eager to get back to work.

“Our centres are spacious and well-suited for social distancing, and we’ve put in place wide-ranging hygiene and sanitisation measures.”

Hollywood Bowl has reopened 48 of its UK centres (Image: Getty)

Alleys operated at 50 per cent capacity, restricting groups to a maximum of six, with fewer lanes in use and players no longer sharing the ball return between bowling lanes.

Grosvenor and Genting casinos also reopened the majority of their casinos but limited customer numbers, and introduced screens at tables.

A Genting spokesman said: “This is what we have been building towards for some time now, and the delays we have experienced have of course been hugely frustrating and damaging to the business.

“The reopening is therefore incredibly exciting for all involved and we cannot wait to welcome customers back into our casinos.”

However, the new restrictions will not apply in areas where local lockdown measures remain in place, such as Leicester and parts of the North-west.

READ  Sophie Wessex revelation: What Countess is REALLY like to work with - ‘She cried’ | Royal | News (Reports)

Limited customer numbers will be allowed into casinos (Image: Getty)

Casinos, skating rinks, bowling alleys, exhibition halls, conference centres and indoor play areas will not be permitted to open in these areas.

A reduced crowd of 300 were able to watch live snooker at yesterday’s final of the World Snooker Championship at Sheffield’s Crucible Theatre. And the same number will see the conclusion today.

The Crucible is part of a pilot of sporting events to test if spectators can safely return, with the aim to allow fans back into stadia and other venues along with social distancing measures from October 1.

Nightclubs and discos, however, remain closed.

Those responsible for illegal gatherings of more than 30 people will face spot fines of up to £10,000 and Prime Minister Boris Johnson also announced tougher fines for people repeatedly not wearing a mask.

Under current rules, people face a £100 fine but the penalty will now double for subsequent offences up to a £3,200 maximum.

A further three people were reported to have died within 28 days after testing positive for the coronavirus.