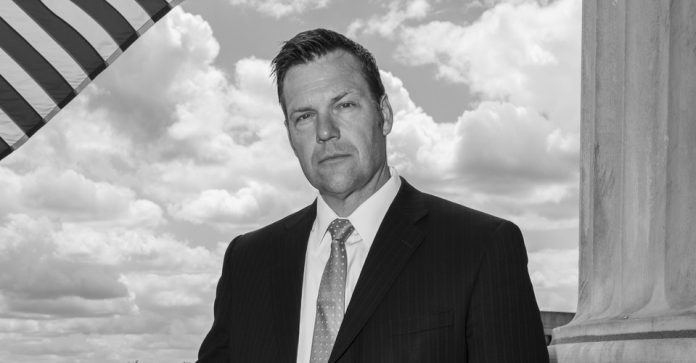 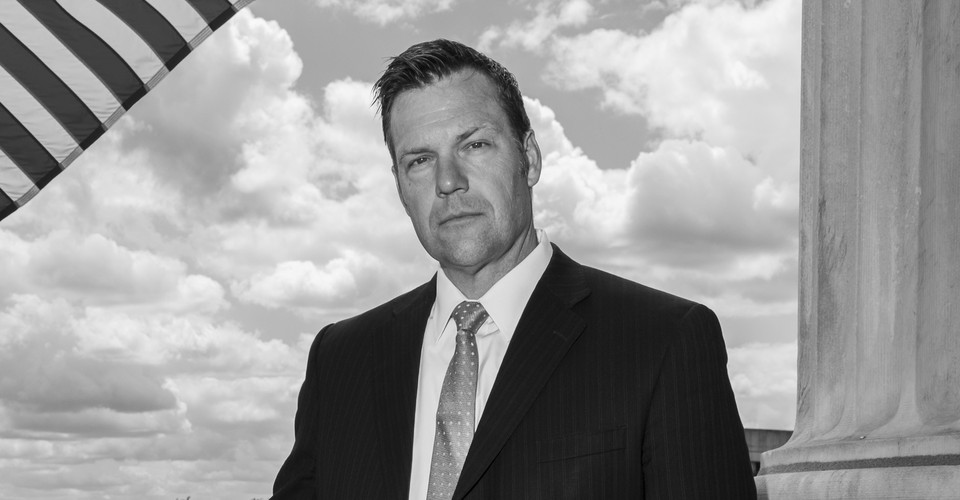 There are few Republican politicians aside from Donald Trump who Democrats abhor more than Kris Kobach, the Kansas conservative who has gained national fame as an architect of laws to force immigrants to show their papers to police and voters to prove their citizenship at the polls.

Yet for the past few weeks, Democrats have come to Kobach’s rescue, spending at least $4 million to help the unapologetic Trump ally win the Republican nomination for an open U.S. Senate seat in Kansas. The primary is August 4, and a Democratic-aligned super PAC formed in recent weeks has poured millions into TV ads that bash Kobach’s opponent, Representative Roger Marshall, the Republican backed by Senate Majority Leader Mitch McConnell and other state and national GOP power brokers. The ads attack Marshall from the right, lumping him in with “Mitt Romney Republicans and Never Trumpers” who think Kobach is “too conservative.” The committee, called the Sunflower State PAC, is using an advertising firm that created commercials for Bernie Sanders’s 2016 presidential campaign and for a super PAC backing Joe Biden this year.

It appears to be a simple, if clandestine, case of primary meddling, a tactic that has become popular among both parties in recent years: Democrats see Kobach as the weaker, more polarizing GOP candidate and are trying to boost him now so they can pummel him in the fall. But the strategy is unnerving the party’s staunchest immigrant advocates, who see Kobach as a uniquely dangerous figure and who worry the move could backfire and end up giving him a national platform in the Senate and a potential launching pad to the presidency.

“You’re playing with fire here,” Frank Sharry, the executive director of America’s Voice and a longtime advocate for immigration reform, told me in an interview. “He’s not a stooge to be lifted in the hopes of winning a Senate seat,” he said of Kobach. “He is the devil incarnate, and we’ve got to put a stake through a heart at every opportunity. So we’re not going to be contributing to this group or patting them on the back.”

Kobach first rose to national prominence when he helped draft an Arizona law in 2010—and similar measures in other states—that required police officers to demand immigration papers of people they suspected of being in the country illegally. He won election as Kansas’s secretary of state later that year, after which he promptly helped write, and later implemented, one of the nation’s strictest voter-ID laws. Kobach advised Trump on immigration policy, and, in 2017, the president picked him to lead his short-lived “Commission on Election Integrity.”

But Kobach narrowly lost his bid for governor to the Democrat Laura Kelly in 2018, and Republicans worry that his nomination next week could hand Democrats a Senate seat in Kansas for the first time since the Roosevelt administration. Trump has resisted pleas from senior Republicans to back Marshall, The New York Times reported last week. Either Kobach or Marshall will likely face the Democrat Barbara Bollier, a longtime Republican state legislator who bolted the party in 2018 after the GOP leaders sanctioned her for endorsing Kelly in the governor’s race. Primary polling has been scarce, but a survey conducted in late May showed Marshall faring much better than Kobach against Bollier in a hypothetical matchup.

Elected Democrats I spoke with said they didn’t question the motives behind the shadowy super PAC’s ads and were cautious about criticizing them. If Biden defeats Trump for the presidency, Democrats need a net gain of three seats to capture the Senate majority, and although winning the Republican-held seat in Kansas likely wouldn’t be the tipping point, it would add a crucial vote to their margin in a narrowly divided chamber. But despite Trump’s low public approval nationally, Kansas remains a state he’s expected to carry, and Bollier’s defeat of Kobach is far from a sure thing.

“I’m confident that they are acting in good faith in terms of what they think the best matchup would be for a Democrat in Kansas,” Representative Joaquin Castro of Texas, the chair of the Congressional Hispanic Caucus, told me. “At the same time, it’s a risky move, and if Kris Kobach is able to win that Senate seat, then minority communities and immigrant communities are the ones that are going to pay the highest price.”

Officially, no Democrats are actually admitting they’re trying to help Kobach. The Democratic Senatorial Campaign Committee said Bollier is “well positioned to take on whoever emerges from the very nasty and bruising primary,” pointing to an early-June poll showing her running neck-and-neck with Marshall as well as Kobach. A Bollier spokesperson offered a similar message. The Senate Majority PAC—the Democrats’ main Senate super PAC—declined to comment entirely. And when I emailed the Sunflower State PAC to ask for details on its donors and purpose, it refused to shed light on its activities. “Sunflower State is focused on educating voters about the U.S. Senate race in Kansas and is operating in accordance with all federal election law,” the unsigned reply read. The super PAC has spent more than $4 million in Kansas, according to an account that tracks campaign-ad spending, which is about five times as much as Kobach had spent in total through the end of June.

Democrats have successfully pulled off this kind of primary gambit before, most memorably in Missouri in 2012, when Senator Claire McCaskill ran ads aimed at lifting the conservative Todd Akin in the primary before she defeated him that November (with help from an outrageous Akin comment about abortion that summer). And on the Republican side, Senator John Cornyn ran ads apparently designed to help a Democratic state legislator defeat the Air Force veteran M. J. Hegar in the party primary; the intervention didn’t work, as Cornyn is now facing Hegar.

What worries Democrats this time, however, is that the 54-year-old Kobach is no Akin, a relatively generic religious conservative who seemed destined, at the age of 67, for a seat on the Senate’s back bench. “He is way, way out there,” Representative Zoe Lofgren of California, the chair of the House Judiciary Subcommittee on immigration, told me. “I don’t think there’d be anyone to the right of him in the Senate.”

Others I spoke with said plainly that Kobach is a racist. “He is today’s incarnation of David Duke,” Ali Noorani, the executive director of the National Immigration Forum, told me.

The assumption is that the ambitious, Harvard- and Yale-educated Kobach would be more than another Republican vote—he’d undoubtedly try to use his perch to enact national versions of the hard-line laws he wrote at the state level. “He knows how to pull the levers of power in terms of making policy,” Noorani said. “Kris Kobach is not just some loose cannon,” he added. “He would not just be sending out press releases.”

Castro, noting Kobach’s elite education and his easygoing manner in television appearances, said he “represents a kind of intellectualized racism.” “He’s a tactician and a strategist when it comes to writing bigotry into the law and giving it a nicer name,” Castro said. “So whereas you may have other people who are generally bigoted, he applies his racism strategically into the law.”

A spokesperson for Kobach’s campaign did not return a request for comment.

In 2012, McCaskill’s boasting about her efforts to pick her Republican opponent made the maneuver seem edgy—not quite a dirty trick but a perfectly legal bit of political gamesmanship. But Trump’s election four years later, after some Democrats gleefully cheered his victory in the GOP primary, was a searing lesson to be careful what you wish for. “I think politics has changed,” Noorani said. “Strategies like this could end up too cute by half.”

In Kansas, advocates like Sharry see an opportunity to end Kobach’s political career, to do to him what voters in Iowa and Alabama did in rejecting the immigration foes Steve King and Jeff Sessions, respectively, over the past couple of months. And if that defeat comes in a Republican primary and not to the benefit of a Democrat in November, so be it. “We want Kobach out of politics,” Sharry told me. “We want him discredited and disgraced for all that he’s done to hurt millions of people over the years of his political career.”

The post Democrats Are Spending Millions to Boost a Trump Ally appeared first on The Atlantic.