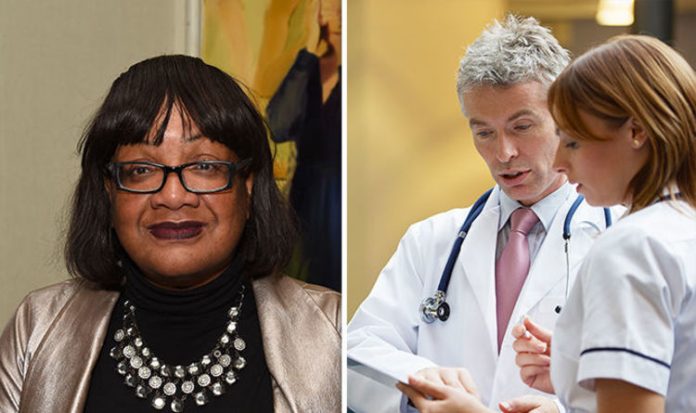 Speaking in London, Diane Abbott will lay out out plans for an accelerated citizenship and visa system which allows skilled foreign workers like doctors and nurses to more easily move to the UK.

Labour says it would adjust the system according to the needs of the British economy and that immigration would be driven by the sectors which are currently understaffed.

Ms Abbott will say: “Under a new work visa system, anyone with specified bona fide skills can come here to work.

“The new, integrated work visa will allow us to offer rights of work and residency and accelerated citizenship to a range of professions, workers and those creating employment who want to come here.

“People coming to take up specific job offers, where it can be shown that those jobs cannot be filled by workers already resident here, will be able to come here.”

Labour has not set out how exactly the system would work and what proof would be needed for a foreign national to be accepted for a job over a British worker.

The party has already said it would scrap Theresa May’s “fake” target to cut net migration to the tens of thousands and the Shadow Home Secretary will reiterate this today.

She will reaffirm Labour’s position that immigration policy should be on the basis of what skills are needed over “meaningless and arbitrary targets”.

Ms Abbott’s plans will include repealing the Immigration Act 2014 and end the “hostile environment” policy the Government has been enforcing.

The Labour Party has heavily criticised the Government for its handling of the Windrush scandal, which saw immigrants who had legitimately lived in the country for numerous year being wrongfully deported.

Some blamed these deportations on the Government’s “hostile environment” policy.

However, Home Office ministers have said Labour also had a part to play in the events which took place over a number of years.

Ms Abbott will nevertheless be taking a hardline stance when it comes to the deportation of criminals, saying that if a judge recommends deportation at the end of their sentence they should be taken “from the prison to the airport”.

She will also be endorsing stricter border controls to prevent immigration.

Ms Abbott will say in her speech tomorrow: “There are illegal immigrants who come here. The Home Office is extraordinary inefficient at removing them.

“People are detained for months, even years on end. It is costly and inefficient.

“We will focus on preventing illegal immigration. We will also make the system of deportation of overseas criminals much easier and smoother.

“If a judge offers a recommendation for deportation for serious criminals post-sentence, that should be carried out as a matter of routine. From the prison to the airport.”