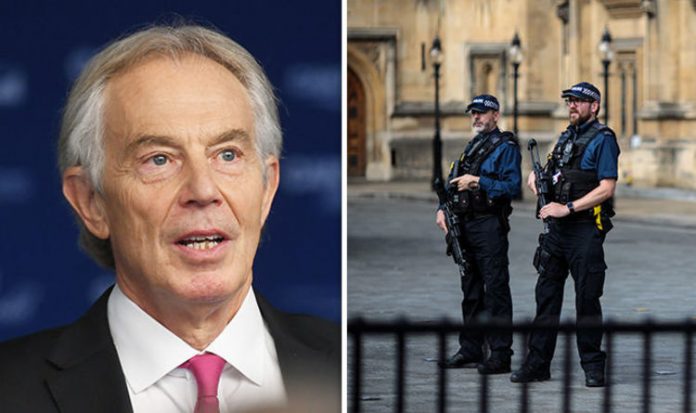 The former Prime Minister will give a speech in Washington DC today to advocate for a re-balancing of counter-extremism efforts.

The Tony Blair Institute for Global Change is launching the “global extremism monitor” which they describe as a “yearly tracker of global Islamist activity”.

The study found that only one percent of the UK’s anti-terrorism budget is spent on “countering the ideology driving Islamist violence”.

In a forward to the report, Mr Blair said: “Islamist extremism is global and growing.

“It didn’t begin with Al-Qaeda, nor will it end with the defeat of ISIS.

“It is a global movement, driven by a guiding transnational religious-political ideology.

“There are now more than 120 groups operating in the world, all actively engaged in this violence, all adhering to the same ideology.”

The extremism monitor found that in 2017 there were 121 groups in the world adhering to an extremist Islamist ideology.

It also found that at least 84,023 people in 66 countries were killed due to violent Islamist extremism last year.

The identities of 292 people killed could not be confirmed.

The largest number of deaths occurred in Syria (34,853), and across the world Muslims were the most frequent victims of Islamic violence.

Mr Blair, who served as a Middle East peace envoy between 2007 and 2015, said that counter-terrorism efforts will never be enough unless governments develop a more complex strategy.

He endorsed international education reform to root out religious prejudice and investing in fragile states where violent groups can flourish.

He said in the report: “Security measures will be vital. But security alone will never be enough. It will only slow the violence.

“Presently, the world collectively spends hundreds of billions of dollars every year in additional security in airports, protection and counter-terrorism.

“It spends a small fraction of that on soft-power measures that tackle the underlying ideology.

“A security-only approach is important to address public concerns, but ultimately it will never succeed.

“Security must be complemented by other measures, not just at a state level, but also multilaterally.

“Unless there is a global will to meet the depth of the challenges, the ideology of Islamism will grow – and with it, the violence. It is time to act.”