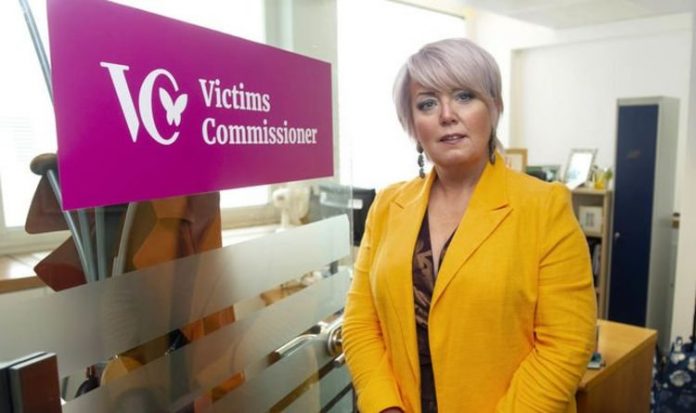 Some people, including high-earning professionals, have been left hundreds of thousands of pounds in debt after breaking up with a spouse or lover who owes cash. Now Baroness Newlove says the imminent Domestic Abuse Bill must be tweaked to safeguard them. The former Victims’ Commissioner Baroness Newlove said: “It’s human lives we are playing with here. “Post-separation abuse needs to be in the Bill – they are putting women in debt.

“They are absolutely making them penniless – there’s no class distinction. I do hope they will look at the criminal side and the civil side.”

She added: “We can’t say it’s an all-singing, dancing domestic abuse legislation if we are still fighting at the highest level.”

Post-separation abuse takes many forms, with a quarter of women reporting that their estranged partner still continues to harm and control them economically.

The charity Surviving Economic Abuse (SEA) is also battling for an amendment in the Bill to extend the existing legislation on coercive control to post-separation abuse.

Under the Daily Express End This Injustice campaign, the crusade has won a Government pledge to overhaul the Family Court system through the Domestic Abuse Bill.

We are also demanding further legislation to offer greater protection to those being abused.

Baroness Newlove said it was vital community services were at the heart of the Bill as it would protect lives.

They include phone hotlines, temporary shelters and help finding housing. The majority of domestic abuse victims use them.

The first pandemic lockdown alone led to an 80 per cent rise in calls to the National Domestic Abuse Helpline.

The baroness said: “The community service is a big win-win – if you do not have that in there, there will be more murders.”

Sickening figures show two women a week are killed by either their current or former partner. Thirty men die through domestic abuse a year.

Nearly a third of women aged 16 to 59 will live through domestic abuse. Some 1.6 million women experienced it in the year ending March 2019.

One in six men will be on the receiving end in their lifetime.

It makes up 16 per cent of all violent crime and has more repeat victims than any other offence.

On average there will have been 35 assaults before a victim calls the police. Baroness Newlove said there needed to be greater investment than the £7million budgeted for bringing offenders to book.

She said: “We have 50,000 perpetrators but the money only deals with 2,000. No wonder we have a criminal justice system that is falling and collapsing.

“It’s horrendous, we need something that’s accountable and responsible. How much do we value lives?”

She said she shared the same view as criminal behavioural analyst Laura Richards that agencies must work together to help victims.

The baroness said: “It’s important we have a national approach with multi-agencies – the work of Laura Richards has been immense.”

The Domestic Abuse Bill heads towards the report stage at the House of Lords on March 8.

Baroness Newlove said there was still a way to go on the Bill. She added: “Non-fatal strangulation needs to be in the Bill, there’s post-separation abuse and a register. I am not prepared to have blood on my hands. How long are we going to wait? There will be another 100 women who lose their lives if we do not put stronger laws into place.” She added: “We still have a lot of work to do.”

Safeguarding Minister Victoria Atkins said: Our highest-ever investment of £7million to target perpetrators and stop the cycle of abuse is in addition to the work that already happens in the criminal justice system.”

The Lord Chancellor has indicated non-fatal strangulation will be made a standalone offence this year, with a maximum sentence of seven years.