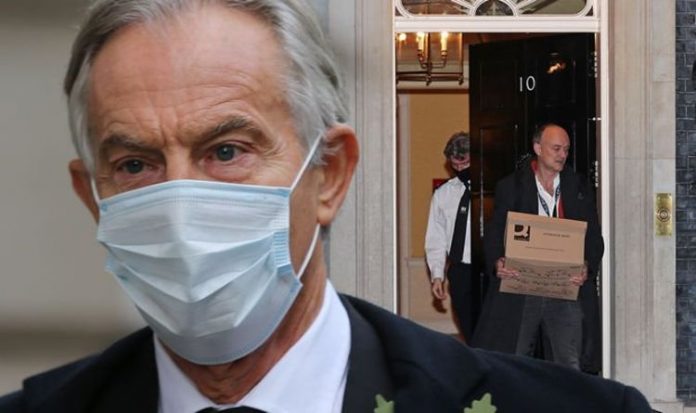 Prime Minister Boris Johnson’s chief adviser Dominic Cummings left his job at Number 10 Downing Street after it was reported he lost a huge power struggle engulfing the Cabinet. Initially, he was supposed to leave by the end of the year but it is believed his resignation was brought forward by a “shouty row” on Thursday. The Brexit guru chose to exit through the front door past waiting photographers carrying a cardboard box full of his possessions.

The former Vote Leave boss – who shot to political fame working on the Brexit campaign in 2016 – confirmed his departure late after losing a key ally in spin doctor Lee Cain.

The Tory campaigner is known for his aggressive style and has long caused tensions in Government, wanting to overhaul the civil service and shake up crusty Whitehall departments.

Mr Johnson is now under pressure to bring in “someone with big boy pants” to get a grip of Number 10.

As many wonder whether Mr Cummings’ departure will mean many of his planned reforms will be brushed under the carpet, in an exclusive interview with Express.co.uk, former Ukip MP Douglas Carswell shed light on the Brexit guru’s intentions.

Mr Carswell said: “Reforming Whitehall has been something driven by Dominic Cummings – that is true.

“If you spent time talking to some of the ex-Blairite ministers and members of the civil service like I did for six months, they will tell you how difficult it was to turn a parliamentary majority into an effective change of public policy.

“Boris Johnson has a big parliamentary majority and it is only right that we make these long overdue changes to the way Whitehall is organised, to make sure we don’t suffer the fate of Tony Blair’s government.”

The former Vote Leave campaigner added: “Tony Blair came in with these good intentions. He would sit in a room with his civil servants and they would agree to change something.

“Six months later he would ask what had happened and to his incredible frustration, he would eventually realise that people weren’t responding to his instructions.

“It was only 3-4 years after his landslide victory that he gave this famous speech where he complained about the forces of conservatism, and difficulties in bringing policy changes.

“We need to learn the lessons of Blair’s failures, not try to emulate him but learn from his mistakes.”

JUST IN: Brexit deadlock unravelled by Douglas Carswell: ‘There is a split!’

He told Reflections with Peter Hennessy on BBC Radio 4: “I learned it’s [the civil service] great at managing things, but not great at changing things.

“If you had a crisis, there was nothing better than that British system. It kicked in, it operated to a high degree of quality and on numerous occasions I had cause to be thankful for it.”

However, Mr Blair added that he found civil servants “frankly just unresponsive” when it came to major changes, such as healthcare or education reform.

He recalled “early battles” over reforming asylum and immigration policy.

The former Prime Minister also said he did not accept that the Labour government was wrong to bring in special advisers and “to make the system work differently”, adding that this was a “constant debate” between him and senior civil servants such as then-Cabinet Secretary Richard Wilson.