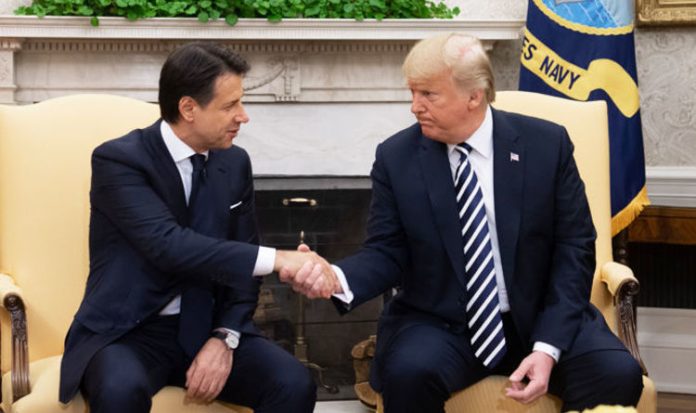 The US president heaped praise on Italy’s increasingly hard-line approach to immigration as he met Mr Conte at the White House yesterday.

Mr Trump grinned as she shook hands with his new ally in the Oval Office, urging other EU countries to follow Italy’s example.

“He’s taken a very firm stance on the border, a stance that few countries have taken, and frankly you’re doing the right thing in my opinion.

“A lot of other countries in Europe should be doing it also.”

Mrs Merkel, the EU’s most powerful leader, has repeatedly emphasised the importance of a joint European solution to the migrant crisis.

He added: “Their meeting was a win-win situation. The Italian was able to stage himself as a statesman, the American won an ally.

“Conte is now Trump’s man in Europe. His best friend on a continent he just called an enemy. A new axis seems to be growing: Washington-Rome.

“In future, it will face the old Berlin-Paris axis. ‘We are now partners’, said Trump.

“It is a partnership against the dominance of Germany and France, of Angela Merkel and Emmanuel Macron.

“So far, the Italians are not quite on the same level as the powerful in Berlin and Paris, but now they have Trump on their side.”

At his press conference at the White House, Mr Conte said Italy and the US were “like twins”.

He added: “With this fruitful meeting, we have taken a further step forward to update our co-operation.

“We are two governments of change, so many things unite us. Italy is becoming a reference point in Europe for the main threats and challenges we face.

“As a lawyer, I can say that President Trump is a very good negotiator, a great defender of American interests.”