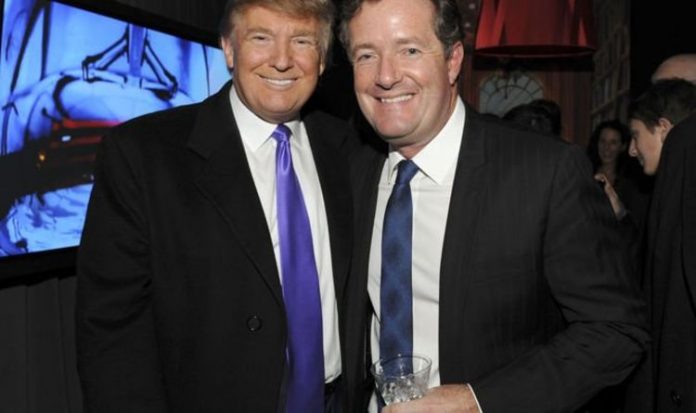 US voters will head to the polls on November 3 to cast their votes and Mr Trump has so far been lagging behind the Democratic presidential candidate Joe Biden.

The Good Morning Britain host appealed to Mr Trump to ask his advice while appearing on Fox News.

Mr Morgan said: “If the President is watching, he might be, I know you unfollowed me on Twitter because I was very critical on you in this crisis.

“You may want to refollow me now because if you take my advice, you still have a chance to keep the White House.”

And now Mr Morgan has revealed the President called him this evening saying he is “going to win”.

Mr Morgan tweeted: “Just had a 25-minute chat on the phone with President Donald Trump from the White House.

The ITV breakfast presenter added they talked about “all sorts of stuff”.

He added: “The election, coronavirus, this week’s debate, Joe Biden, Boris Johnson… and scam phone calls he’d received from people pretending got be me.”

“I got a message back: ‘He just read your email and laughed out loud too’.”

Approximately 56.1 million Americans have cast early ballots across the country either in person or by mail.

The pace of voting could lead to the highest voter turnout rate in more than a century, according to data from the US Elections Project.

Throughout the election campaign, Mr Biden has led Mr Trump in the polls, with projections favouring a Democratic win.

In terms of betting, Mr Biden is the 1/2 favourite with bookmaker Coral to win next month’s election.

Despite this, there has been a surge in last-minute betting support for the President.

Bookmakers Coral have found 75 percent of the bets they have taken over the last seven days have been for Mr Trump who stands at 13/8.

Coral spokesman John Hill said: ”Although Donald Trump is the outsider in our betting to win the US presidential election, that has not put punters off backing him.

“75 percent of the bets we have taken over the last seven days have been for the current president.”

While Mr Biden is leading in the opinion pills, the race is much closer in the crucial battleground of so-called swing states.