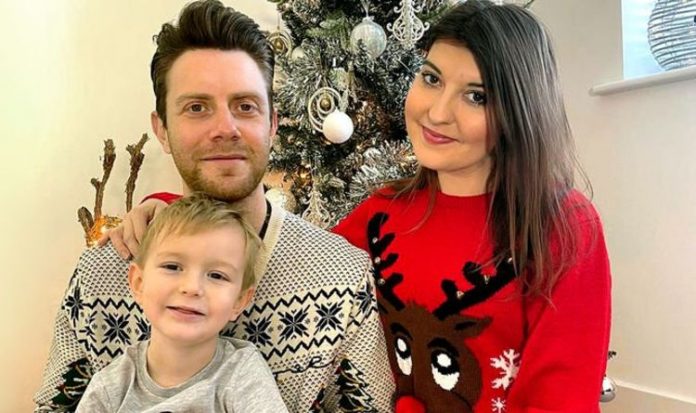 The cystic fibrosis sufferer and Daily Express writer shielded at home during the summer to avoid Covid-19. The mother of one was part of the award-winning Express victory in June to help get wonder drug Kaftrio on the NHS for those with the genetic lung condition. But in the last five weeks she and son Jude, three, have been forced to live separately from husband Chris, who teaches in a busy sixth-form college – with the inevitable risks.

She said: “Being away from my husband for five weeks was really, really tough, and very hard for little Jude.

“Jude is only three years old and does not understand Covid or why we have had to be apart.

“He would say, ‘Why can’t I see my daddy?’ It was heartbreaking.

“But because of Chris’s work as a sixth form teacher, it was too risky for me to be near him in case he brought the virus home to me.

“Now we are back together for Christmas it is fantastic – I couldn’t bear to be apart from him over the holidays.”

Carlie, 30, of Sittingbourne, Kent, has only been on a reduced Kaftrio dose as it clashed with another important medication she was taking.

Carlie has been reunited with husband Chris and son Jude (Image: Debbie O’Hare)

She can now take the full daily Kaftrio dose after stopping a steroid she was taking for a lung fungal infection.

Beaming NHS worker Carlie said the double whammy is the best present she could wish for.

And already Carlie has noticed that being on the maximum dose of US firm Vertex’s drug has made a dramatic difference.

She said: “I used to cough all the time and that’s stopped. I feel like I’ve a lot more energy and more hope for the future.

“I can breathe deeper and have more confidence in my body.”

Carlie was only diagnosed with CF aged nine after mum Debbie went to the library to look up her symptoms and challenged her GP.

Carlie was part of the Express victory in June to help get wonder drug Kaftrio (Image: Jonathan Buckmaster)

At school Carlie kept her condition secret from staff and pupils and was not aware herself her CF was life-limiting until a biology lesson.

Her teacher told the class how those with the mucus-causing lung condition rarely live beyond 30 years-old – leaving Carlie in tears.

In 2014 she caught a deadly, drug-resistant bug called Mycobac-terium Abscessus – and it took a three-year course of antibiotic treatments to shift it.

When she was pregnant with Jude she initially feared for her health but when he was born, she started to fear for her future as his mum too.

She told us: “After having Jude, I was consumed by the worry I was going to leave him prematurely.

“When he was only five weeks old I had a bad infection and spent two weeks in hospital away from Jude – and cried every day.

“But he made me sit up and think I had to fight for my health. I wanted Vertex’s drugs as soon as possible.

“I didn’t want him to be the boy at school whose mum has died.”

We first met Carlie in March 2019 and later – learning of her secret dream of being a journalist – encouraged her to write her weekly Carlie’s Diary column.

Often heartbreaking, Carlie told of her fears, joys and tears to help readers understand the rare condition affecting just 10,500 in the UK and 70,000 worldwide.

Carlie fought all through 2019 alongside us for Vertex’s CF drugs Symkevi and Orkambi and dazzled Health Secretary Matt Hancock at one meeting.

She actually left Mr Hancock in tears after asking him: “If I die before getting Orkambi, can you explain why you failed to my little boy?” Mr Hancock was so moved he rang her in October 2019 to reveal a drug deal had been agreed.

When we began a new campaign, this time for Vertex’s new wonder pill Kaftrio, Carlie again joined the fight.

And when in June this year we won that deal too, Mr Hancock told our Carlie the news first in a bombshell Zoom video call.

During the first lockdown Carlie shielded. Suffering with CF leaves her especially vulnerable to respiratory viruses like Covid-19.

But when coronavirus started to ravage Kent she and Jude had to move in with her parents Martin and Debbie in nearby Gillingham to ensure they didn’t catch the virus via Chris, 30.

Carlie’s mum, Debbie, 57, said: “Even though it was lovely to spend time with them, it was heartbreaking to see Jude crying for his daddy and Carlie and Chris having to talk over FaceTime.”

Chris said: “It was really difficult coming home to an empty house and only seeing my wife and son through FaceTime.

“But the dangers of me bringing home Covid far outweighed my selfish reasons to have them at home.”

Now Carlie – who will continue to pen heartfelt articles for our readers – dreams that when Covid has finally gone she can, with the help of Kaftrio, enjoy the contented future her family deserves.