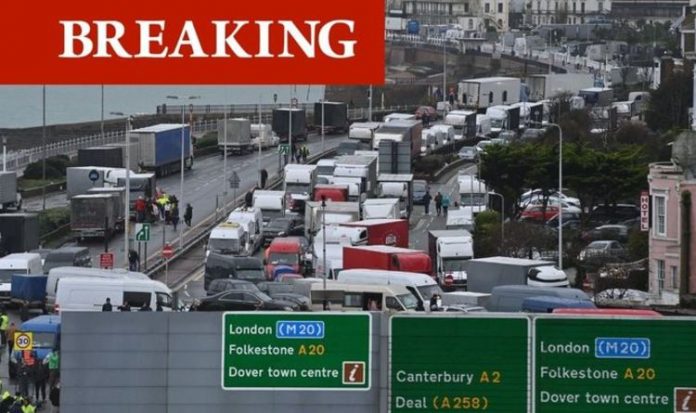 The UK may face food shortages despite the border with France reopening, the British Retail Consortium said.

Andrew Opie, the group’s director of food and sustainability, said: “It is good news for consumers as the French borders have now reopened, however it is essential that lorries get moving across the border as quickly as possible.

“Until the backlog is cleared and supply chains return to normal, we anticipate issues with the availability of some fresh goods.”

This comes after several countries in Europe and around the world closed their borders to the UK due to the a new virulent strain of coronavirus.

Operation Stack was imposed over the weekend following the closure of the borders.

Today, Communities Secretary Robert Jenrick warned it may take a “few days” to clear the backlog of around 4,000 lorries waiting to cross the Channel.

France has lifted the travel ban, but said those seeking to cross into the country from the UK must have a negative coronavirus result.

Hauliers must be able to show proof of a negative test carried out within the past 72 hours in order to be able to cross into France.

The chief executive of the Food and Drink Federation Scotland also warned companies face a “black Christmas” due to delays at the French border.

David Thomson told the BBC: “For those people who export fresh and perishable goods, particularly seafood and salmon in Scotland, it’s been an absolutely disastrous few days and it will lead to a black Christmas for those businesses.

“The deal will be far too late for many people who are delivering perishable goods to the continent.

“It’s too late now to get to customers before Christmas.”

This worrying news comes just hours after supermarket such as Tesco and Sainsbury’s reassured the public there is plenty of stock for the festive season.

In a statement, Tesco said: “We’ve been building our stockholding of key products ahead of the Christmas peak and are working closely with our hauliers and suppliers to continue the supply of goods into our stores.

“We’re doing everything we can to limit the impact for our customers.”

Philip Hambling, head of food at the National Farmers’ Union, said it had been reassured that shops were well supplied.

He said: “We are working to understand and help deal with any immediate implications of the temporary border restrictions between the UK and France on Britain’s farmers and growers and how this may impact their businesses.

“We remain in close contact with our partners across the supply chain where we are reassured that stores are well-stocked and there is plenty of fresh, seasonal British food available.

Supermarket shelves were stripped bare following the news the borders were to close for 48 hours.

“It’s crucial this situation is resolved as soon as possible as there will be perishable produce expected to travel to and from the EU in the coming days.”