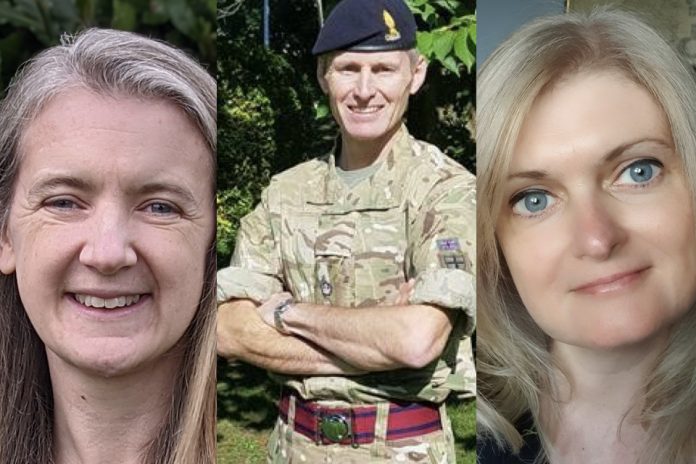 Dr Phillippa Spencer has been awarded the Officer of the Most Excellent Order of the British Empire (OBE), in recognition of her support to the UK’s decision makers by her application of maths to deliver consistent, assured data to prevent the loss of life through exposure to COVID-19, Novichok and Ebola.

I am genuinely overwhelmed by the honour. The award recognises not only me, but an incredible team of people who provide vital support to so many collective efforts. I am beyond happy to have been nominated.

Dr Joanne Thwaite has been awarded the Member of the Most Excellent Order of the British Empire (MBE), which recognises her service to the NHS during COVID-19, in particular her selfless dedication carrying out repeated and sustained deployments to Hospital laboratories where she supported NHS staff dealing with an unprecedented increase of workload. Using her scientific skillset Joanne worked within diagnostic laboratories, from the very onset of the pandemic.

I am humbled and excited to be nominated for this honour which also represents the dedication and professionalism of a team of other Dstl specialist microbiologists. I am proud to be a part of that team and that I could help NHS colleagues deliver life-saving care at this time of acute national health response

Dstl Military Adviser Lt Col Gareth Walker Royal Engineers (RE) also receives an OBE in recognition of his performance in command of 66 Works Group with responsibility for Defence’s specialist water, fuel and materials infrastructure capabilities. During a two and a half year period he led vital military support to natural disasters in the British Caribbean and extreme flooding events in the UK, as well as myriad operations and tasks worldwide.

I am absolutely delighted to be receiving this most prestigious award, and am incredibly grateful to those that nominated me. It is a privilege and honour to work in this amazing organisation that is home to some of the most talented people I have worked with. Dstl engineers, scientists and analysts are dedicated to developing and improving capabilities that are vital to the UK’s defence and security, and it is exciting to be part of a team that is redoubling its efforts to meet the future challenges and threats that we face.

We also congratulate Warrant Officer 1st Class (WO1) Ian Conolly, who has been awarded the Meritorious Service Medal (MSM) in the Queen’s New Year’s Honours list. Ian works as the Senior Acoustic Analyst within the Underwater Group at Dstl Portsdown West. The MSM is a very old medal, first established in the 1840s; there is a strict limit on the number of annual awards and it is now only awarded to non-commissioned officers who have provided unbroken “good, faithful and meritorious service.” The Royal Navy may recommend its award to no more than 49 recipients annually.

I offer my sincere congratulations to all those awarded. It gives me great pride to see our people recognised in this prestigious way. The awards are deserved recognition of dedication, professionalism and technical excellence.