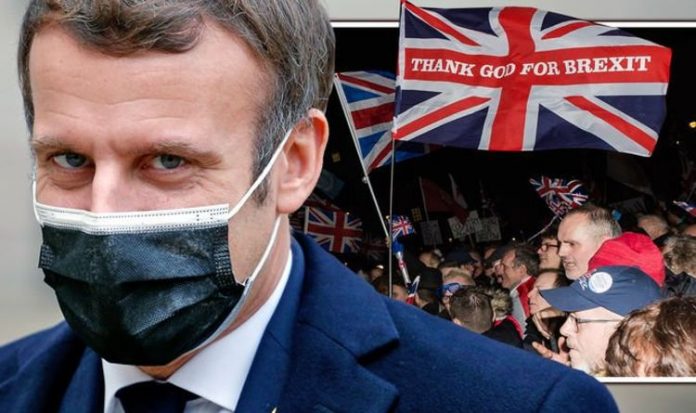 Mr Macron has proved to be a difficult customer during negotiations between the UK and the EU as he aims to defend France’s interests. The French President has threatened to veto a trade deal over fishing rights and regulation amid mounting pressure from fishermen in northern France. Speaking about the row over fishing earlier this month, Mr Macron said: “We know the terms, and I’m consistent, so no, I don’t want to have my cake and eat it but I do want the pieces cut equally because I’m not giving my piece away.” Meanwhile, a former French minister, Nathalie Loiseau, warned the UK will lose more from Brexit than the EU.

She said: “Nobody wants a no deal but we all know as well that the UK has much more to lose because the UK is asking for full access to the single market.”

Mr Macron and co have been critical of Brexit from the very outset, evidenced by his comments when he was Paris’ Economy Minister in 2016.

Just five days before the UK voted to leave the EU, Mr Macron mocked the prospect of the UK leaving the EU.

He said: “If I was British, I would vote resolutely remain because it’s in the UK’s interest.

“Leaving the EU would mean the ‘Guernseyfication’ of the UK, which would then be a little country on the world scale.

“It would isolate itself and become a trading post and arbitration place at Europe’s border.”

He added that within a week of a vote to leave, the European Council would collectively send “a very firm message and timetable” on the consequences of Brexit.

Mr Macron continued: “In the interests of the EU, we can’t leave any margin of ambiguity or let too much time go by.”

He also argued that the UK must contribute to the EU budget if the country wants to keep access to European markets post-Brexit.

If not, Mr Macron appeared to suggest a no deal Brexit would be the only option left.

He said: “You’re either in or you’re out. The day after an exit, there would be no more financial passport for British establishments.

Christiane Lambert of the FNSEA union said French wine and spirits producers would be hit hardest, as their sector had a £1.1billion (€1.2bn) annual surplus in trade with the UK.