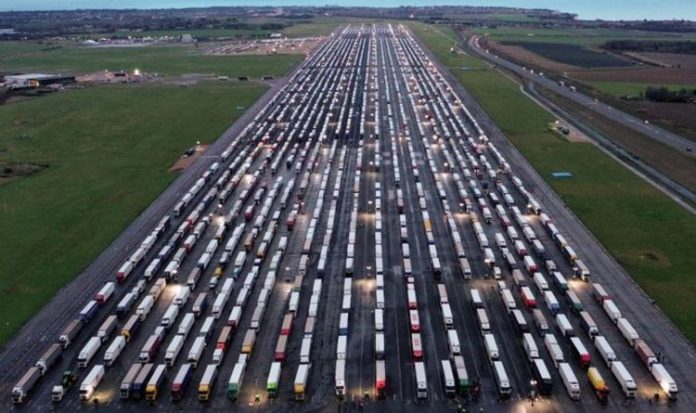 Kent: Lorries back up for miles on M20 due to blockade

The French president grudgingly bowed to EU pressure to lift his blockade of the UK. Mr Macron ended the travel ban only after Brussels waded in to call for an end to the border chaos. In a deal struck following cross-Channel crisis talks, lorry drivers will be allowed into France if they test negative for coronavirus.

Mobile NHS units backed up by the military will begin testing the 2,800 truckers stuck at Dover and the emergency lorry park at Manston airport, using rapid 20-minute tests.

Nevertheless thousands of drivers will spend Christmas Day stuck in their cabs as officials race to clear the backlog.

A Government source said: “It’s going to take a long time to clear. I don’t think anyone is pretending it’s going to happen overnight.”

The French insistence on testing flew in the face of an EU judgment that any such process “should not lead to transport disruptions” and caused furious rows during talks.

President Macron’s extreme response to the new virus strain was a far cry from his promises earlier this year to maintain warm relations with the UK.

Lorries and heavy goods vehicles parked on the tarmac at Manston Airport near Ramsgate (Image: AFP via Getty Images)

In an address to the British people beginning “Dear British friends” on February 1, the morning after the UK left the EU, he pledged: “Never has France or the French people been driven by a desire for revenge or punishment.

“It is in this spirit of mutual respect and commitment to the European Union and with such powerful ties between our two countries that we must look to the future and build our new relationship.

“You are leaving the European Union but you are not leaving Europe. Nor are you becoming detached from France or the friendship of its people. The Channel has never managed to separate our destinies; Brexit will not do so, either.”

But on Sunday, France imposed the 48-hour travel ban causing mayhem for supply chains across Europe and doing almost nothing to suppress the rapid spread of the new virus strain, which is already present in France.

Marie Noelle Poujet, who is trapped at the UK border and will miss her mother’s funeral today, said: “I am French but this is all our fault. It is definitely political to do with Brexit and the fishing.”

It is believed part of the reason Mr Macron relented was the growing anger among French nationals caught in the disruption.

UK sources said the French “found themselves in a hole and we helped to get them out”. More details emerged last night on how the blockade would be eased and UK officials said the arrangement would be reviewed in a fortnight.

French transport minister Jean- Baptiste Djebarri said: “Planes, boats and Eurostar trains will resume service as of Wednesday morning. French nationals, people living in France and those with a legitimate reason will have to be carrying a negative test.”

France initially demanded the slower swab testing system was used but that would have left truckers facing weeks of misery.

Lorries parked up on the M20 in Kent near Folkestone (Image: Andrew Matthews/PA Wire/PA Images)

Industry chiefs said at least 4,000 trucks were likely to be caught up in wider delays at Dover, with UK exports including Scottish seafood taking a “huge” hit.

Ian Wright, of the Food and Drink Federation, said England’s chief medical officer, Professor Chris Whitty, scared the continent into introducing travel bans with his statement on Saturday about the mutant virus strain. He told a Commons committee: “The Government was well aware of the power of the announcement…and Chris Whitty went out of his way to rightly scare people over the impact.

“Everyone would have rightly known that everyone in Europe would have reacted this way, and in fact we felt similarly with Danish mink infected. The consequence of this is the chaos we’ve seen over the past 24 hours.”

Andrew Opie, of the British Retail Consortium, warned unless the trucks can start travelling to Europe again “we will have problems with fresh produce from December 27”.

Duncan Buchanan, of the Road Haulage Association, said: “This is a very different level of supply chain disruption, of the like we have probably never experienced.

“Many of the retailers are saying that we are up until Christmas, we will be fine until Christmas at least, but we must recover very fast to keep the shops fully stocked after Christmas. It’s a big worry.”

The European Commission said blanket travel bans should be lifted.

“At the same time blanket travel bans should not prevent thousands of EU and UK citizens from returning to their homes”.