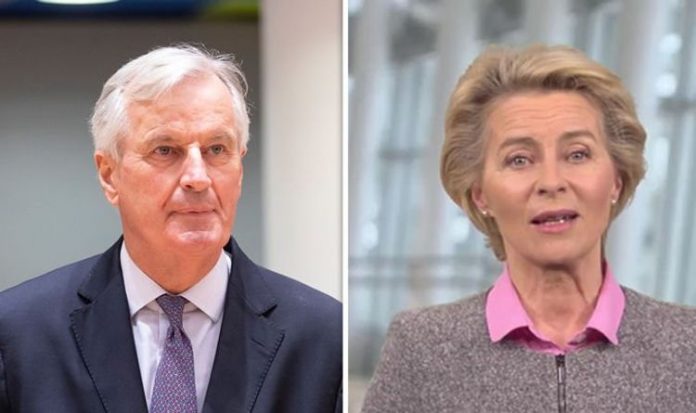 Despite leading the EU’s charge for the past four-and-a-half years over Brexit discussions, Mr Barnier appeared to play second fiddle to Ms von der Leyen, who was centre stage this afternoon to announce the UK and the EU have reached a trade agreement. She said: “We have finally found an agreement. It was a long and winding road, but we have got a good deal to show for it. “It is fair, it is a balanced deal, and it is the right and responsible thing to do for both sides.”

The EU chief also quoted Shakespeare to say that “parting is such sweet sorrow”.

However, Ms von der Leyen remained defiant, adding that “it is time to leave Brexit behind. Our future is made in Europe.”

EU Chief Brexit Negotiator Michel Barnier was also present alongside his boss, but much of the trade talk detail had already been confirmed by Ms von der Leyen.

He said: “The clock is no longer ticking. After four years of collective effort and EU unity.”

According to the report, Ms von der Leyen sent her deputy, Stephanie Riso, to talks as the European Commission President “tightened her grip on the negotiations”.

Mr Barnier, the EU’s appointed negotiator, was said to be “not happy” according to one source.

They said: “He [Barnier] raised flags. It was masterful and subtle but everyone was aware that Barnier himself was not happy with the von der Leyen and Riso approach of getting a deal ‘whatever’ it takes.”

READ MORE: EU insider’s furious parting swipe: ‘We will not be friends!’

He said the negotiations were “sometimes fierce” but the deal is “a good thing for our friends and partners” in the EU.

He added: “We will be able to decide how and where we are going to stimulate new jobs and new homes in freeports and new green industrial zones.

“For the first time since 1973, we will be an independent coastal state with full control over our waters.”