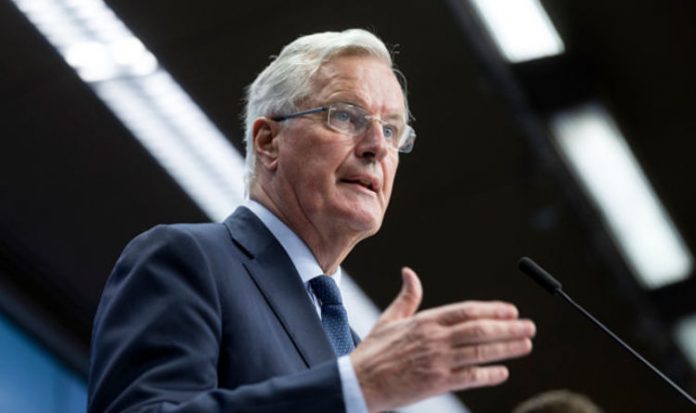 In a last-ditch attempt to unlock plans for a “backstop” on the Northern Ireland border, Mr Barnier is discussing proposals with Dublin to give the job of recording goods heading to Belfast to British officials to prevent the event of a no-deal Brexit.

The proposal is being looked over in order to “de-dramatise” the Irish border row, which has plagued agreement talks between the EU and Britain for nearly two years since the result of the June 2016 referendum, the Financial Times reports.

This week Theresa May will meet with 27 leaders at an EU summit in Salzburg, Austria, where she will discuss plans to discuss a Brexit deal while officials work behind the scenes on the Northern Ireland riddle.

The plan being proposed is to have Britain check and record goods at ports under Brussels’s “trusted trader” scheme.

This would give reassurance to the EU that goods traveling between Dublin and Belfast were doing so under single market rules and avoid any physical infrastructure being put in place.

Mr Barnier told British MPs this month: “We are open to discussing other backstops, so we can discuss this text, we can make changes to it.”

The proposal comes after data sent to the EU by Brexit secretary Dominic Raab revealed that the amount of goods currently traveling between the Irish border was much less than they initially thought.

Figures showed that of he 1.8million goods traveling across the Irish Sea, 55 percent were being shipped between the UK and the Republic of Ireland compared to 45 percent traveling between the British mainland and Northern Ireland.

A British official said: “They thought a much bigger volume of traffic to Northern Ireland came through the port of Dublin and they could simply carry out checks there.”

The same data also show the type of trade happening between Britain and Northern Ireland was not done by big business, but everyday trade with 70 percent of goods to go straight onto the high street.

Mrs May could face a gruelling leadership challenge at the Conservative Party conference on September 30 having told her cabinet they will have to decide between her proposed deal with the EU that will keep Britain in the bloc’s customs union and single market, or no deal at all.