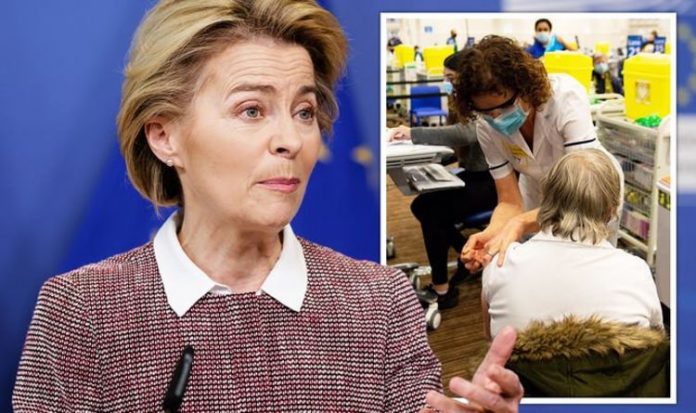 Vaccine: ‘EU is the virus, not the pandemic’ says Gallois

French President Emmanuel Macron has recently criticised the UK’s vaccination strategy, questioning its effectiveness and arguing France is being “safer”. Mr Macron claimed the AstraZeneca jabs appeared to be “quasi-ineffective” on people older than 65 – just hours after the European Medicines Agency (EMA) approved it in the whole of Europe. He also condemned Britain’s decision to extend the time between people receiving their first and second dose, from 28 days to 12 weeks.

The 43-year-old insisted the “goal is not to have the biggest number of first injections”, and claimed “we are lying to people when we tell them they’ve been vaccinated by getting one injection of a vaccine that consists of two injections”.

The comments, refuted by British scientists, came as the EU, AstraZeneca, and the UK engaged in a vicious war of words, with Brussels demanding the drugs company redirect UK-made jabs to make up for a manufacturing shortfall in Europe.

On Friday evening, the row escalated further as the EU said it would be triggering an emergency provision in the Brexit deal to control COVID-19 vaccine exports, including the possible introduction of checks at the border of Ireland and Northern Ireland to prevent shipments entering the UK.

After fierce condemnation from London, Belfast, and Dublin, the EU performed a swift U-turn.

As the row intensifies, in an exclusive interview with Express.co.uk, Italian MEP Antonio Maria Rinaldi shed light on the European Union’s blunder, claiming the bloc is “trying to undermine” Britain.

He said: “The UK left the EU, so Brussels is doing whatever it can to discredit whatever Boris Johnson does.

“But look at the vaccine rollout in Britain… Johnson is miles ahead.

So far, the bloc has only managed to administer about 8.9 million doses in total, about two for every 100 citizens.

On the other hand, the UK is running at 10.5 respectively.

Mr Rinaldi added: “Because of this complete disaster, the EU will be the last one to leave the state of emergency.

“We will pay both in terms of death and economic recovery.

“Britain will be much quicker and it’s all thanks to Brexit.”

According to the head of Oxford-based think-tank Euro Intelligence Wolfgang Munchau, the EU’s vaccine fiasco will have serious consequences, particularly in countries where elections are nearing.

He wrote in a recent report: “Vaccination is not as big a story in the European media compared to, for example, the UK or the US.

“But don’t mis-read that. The impact of the policy error has yet to be felt.

“Even in the UK, which is vaccinating some 600,000-people-a-day, the lockdown is unlikely to be lifted for some time. The EU might be lucky in that the Kent-variant of the virus may not spread as fast as it did in the UK during December.

He noted: “We see the EU’s vaccine crisis having three successive inter-related effects: a prolonged lockdown, a longer second leg of our double-dip recession, and an anti-incumbent mood.

“These have yet to play out.

“With elections in the Netherlands in March, in Germany in September and in France in April 2022, there is potential for upheaval.”

Mr Munchau’s claims are reinforced by the fact national governments’ approval ratings are in free fall almost everywhere in the bloc.

Chief economist at the Centre for European Reform Christian Odendahl wrote on Twitter, attaching a picture of a survey by Frankfurter Allgemeine Zeitung: “Approval rating of Merkel‘s government is in free fall, on the back of the vaccine disaster and mishandling of the second wave.”

The graph shows that only 49 percent of voters now believe Mrs Merkel’s government is doing a good job at handling the crisis.

On the other hand, 42 percent of voters are critical – up from 15 percent in August.

In France, President of the National Rally political party Marine Le Pen has come within reach for the first time of beating French President Emmanuel Macron in the 2022 election.

The Harris survey has suggested that Ms Le Pen is close to breaching the “glass ceiling” of French politics.

The barrier was based on the longstanding assumption that an absolute majority of voters would never back a far-right candidate.

If the next year’s election was staged now, Ms Le Pen would have 48 percent of the vote, with Mr Macron on 52 percent, according to the poll carried out online on January 19 and 20.

The four-point difference, which is within the margin of error, compared with a June 2020 Ifop poll that put Mr Macron at 55 percent and Ms Le Pen at 45.