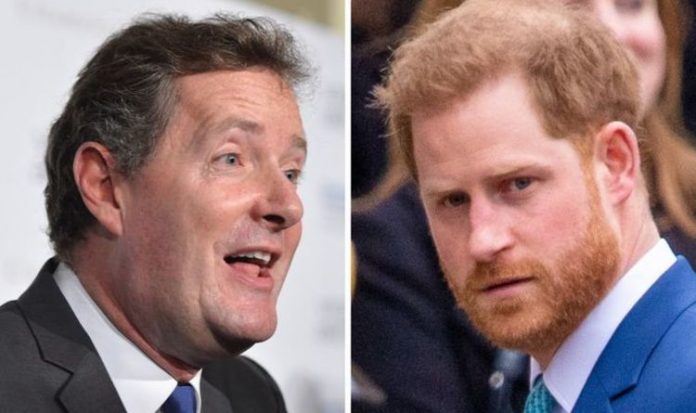 Ahead of this spring’s Megxit negotiations, Piers claimed Harry has become “ever-surly” over the past few years – especially since he and Meghan Markle separated themselves from the Firm. After a series of scandals, Piers questioned what has happened to the once “cheeky” Duke. The 55-year-old Good Morning Britain presenter eleven abelled Harry’s behaviour as “tedious”.

In a comment piece for MailOnline, Piers wrote: “Prince Harry’s not happy, it’s been reported today.

“This revelation isn’t a massive surprise.

“The ever-surly Duke of Sussex has looked thoroughly miserable for the past few years as he’s waged furious battles against everyone from the media to his own brother and father-in-law.

“When Harry’s not issuing angry statements or suing people, he’s hypocritically lecturing us all on things like reducing our carbon footprint while he uses private jets like taxis.

“And honestly? It’s all become very tedious and rather sad.

“What happened to that cheery, cheeky young guy that everyone loved because he never took life too seriously?

A review of Harry and Meghan’s Megxit conditions is set to take place this spring in a meeting with the Queen and other senior royals.

It is thought the couple signed a deal worth an estimated £30million with the music streaming site, and have subsequently begun their own podcast, while they also agreed a £100million deal with Netflix.

It is thought the two will be involved in documentaries, series production and voice-over work for the streaming giant.

Some, however, have argued both deals have clashed with the pair’s other desire to have more privacy.

Royal commentator Ingrid Seward said: “We were told they had gone to California for greater privacy so it all appears rather hypocritical.

“It is extraordinary. This is exactly what they said they wouldn’t do.

“The more they talk about themselves the more people will want them to do just that and won’t be interested in anything else they have to offer.”

The pair also decided they will now not use their His/Her Royal Highness titles following talks with the senior royals.