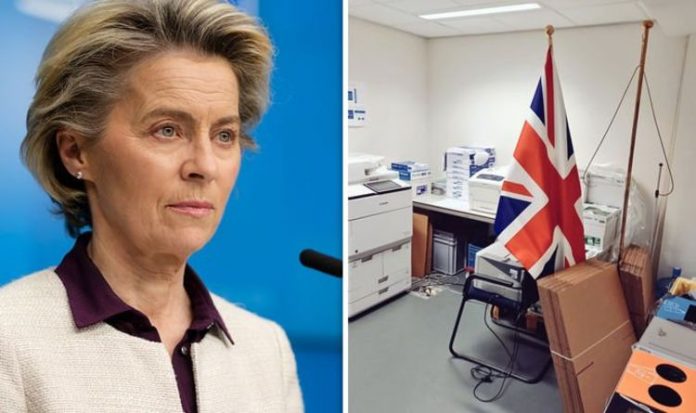 An inaugural meeting between the UK’s new head of mission to Brussels and senior EU officials in Brussels has been “postponed” in response to the status of the bloc’s ambassador in London being downgraded.

Downing Street has been refusing to grant João Vale de Almeida, the EU’s ambassador to the UK, and his 25-strong mission the privileges and immunities afforded to diplomats under the Vienna convention.

The British government’s approach has stirred anger in Brussels as the EU has 142 other delegations around the world, each of which has full diplomatic status.

Meanwhile, the EU has introduced controls to prevent the export of COVID-19 vaccines from the bloc to Northern Ireland – triggering an angry response from First Minister Arlene Foster who called the decision “aggressive and shameful”.

It has also emerged the Union Flag was found “tucked away in a photocopying room in the Berlaymont building, after the Brussels correspondent for The Times, Bruno Waterfield, posted a picture of it on Twitter.

The Berlaymont is an office building in Brussels, which houses the headquarters of the European Commission.

Britain has had an often-rocky relationship with the bloc, particularly when it comes to flags.

Under EU rules, agreed by Labour in 2006, anybody dispensing European funds had to display the EU flag each May in the week of Europe Day.

However, in 2014, the then Secretary of State for Communities and Local Government Eric Pickles successfully claimed powers back from Brussels with a small victory.

“The last Labour Government signed up to petty EU laws that forced my and other departments to fly the European Union flag outside our buildings.

“I can announce today that we have renegotiated this law.

“Moving forward, this burdensome law to fly the EU flag has gone.

“This small step shows our nation can and should claim powers back from unelected bureaucrats in Brussels.”

Addressing Speaker John Bercow, Mr Pickles added to laughter from MPs: “Could I apologise to you for not flying the flag of Buckingham yesterday to celebrate your birthday.

Mr Bercow replied: “You are forgiven.”