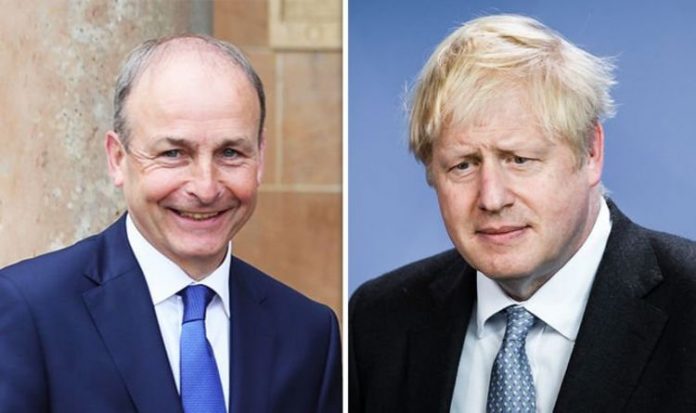 Brexit: Expert says there is ‘a lot of fudge room’ in negotiations

Brexit trade talks have been extended, but the possibility of a deal with the EU remains on a knife edge. While both camps have indicated that there has been progress, access to UK fishing waters could come to sink the possibility of an agreement. Prime Minister Boris Johnson has already agreed to remove the contentious clause of the Internal Market Bill which would have broken international law by giving Northern Ireland “unfettered access” to Britain’s markets.

But the borders around the island of Ireland remain a divisive issue — and the Government has conducted another U-turn on Northern Ireland in recent weeks.

Cabinet Office Minister Michael Gove agreed to allow the EU to have some officials permanently based in Northern Ireland, so it can keep an eye on goods crossing the Irish Sea, earlier this month.

It was part of a deal with the bloc over how the Irish borders will work when the Brexit transition period draws to a close on December 31.

This is separate to the talks over a trade deal which are still deadlocked.

The concession on the EU’s permanent base will therefore not be affected by whether or not a trade deal is struck at the twelfth hour.

Where a no deal Brexit would hit hardest after the UK leaves the EU (Image: Express)

A Government source explained to the Daily Mail: “The EU do have the right under the Northern Ireland protocol [in the withdrawal agreement] to supervise processes conducted by UK authorities, which we will of course support.

“But there will be no mini-embassy, no mission, no building with a flag or brass plaque.”

This is to prevent friction arising on its barrier with the Republic of Ireland, which has been an area of violence in the past when it was a hard border.

However, the idea of an EU base in Northern Ireland was previously dismissed by Downing Street.

READ MORE: Ireland to ‘recover quickly’ from no deal Brexit despite dire forecast

Panic over the Irish border was sparked when Mr Johnson promised Northern Ireland’s businesses that there would be “no forms, no checks, no barriers of any kinds” between it and the rest of the UK.

EU official Helga Schmid then wrote to Downing Street to address these issues.

In May, Prospect magazine claimed: “This was to request a permanent base in Northern Ireland to supervise the implementation of the withdrawal agreement — specifically the vexes issue of customs checks.

“After the UK flatly refused, Schmid wrote again, noting that Article 12 of the Northern Ireland protocol to the withdrawal agreement granted the EU rights and it was ‘necessarily within the discretion of the EU to determine the extent to which it wishes to exercise these rights’.”

Then Cabinet Office Minister, Penny Mordaunt, replied and said Article 12 only permitted EU officials to “be presented during the activities of UK authorities related to the implementation and application of the Protocol”.

There was an urgent need to prevent a hard Irish border to respect the Good Friday Agreement (Image: Getty)

She therefore said the EU would not necessarily be granted a permanent spot in the UK to watch over the borders.

She also warned that if there was such a base there, the bloc would be able to constitute “joint controls” over intra-UK customs, which would divide public opinion and contradict the Good Friday Agreement.

For instance, the DUP (Democratic Unionist Party) was opposed to the EU having a base in Northern Ireland.

Yet Ms Mordaunt’s words were at odds with letters exchanged between the UK and the EU back in April 2019.

Downing Street had reportedly approved of offices in Belfast, Edinburgh and Cardiff.

Prospect magazine explained that “from the EU’s perspective, the circumstances were unchanged and indeed an office was now backed in law” regardless of Ms Mordaunt’s letters.

What needs to happen for a Brexit trade deal to be reached before December 31 (Image: Express)

In reality, the original paperwork had created a vague grey area.

The protocol does suggest that goods arriving in Northern Ireland from Britain need to be checked, even though the country will still be part of the UK’s customs territory.

Both sides had been keen to honour the Good Friday Agreement and make sure the border between Northern Ireland and the Republic remained open.

Not all goods will need to pay tariffs, just those which are considered at high risk of slipping into Ireland.

When that happens, the goods will incur EU tariffs — and therefore officials are needed to check over where produce ends up.

Prospect points out: “The EU has always maintained that like the UK, it too demands control over its economic affairs.”

It remains to be seen whether a trade deal will be secured in the coming days.