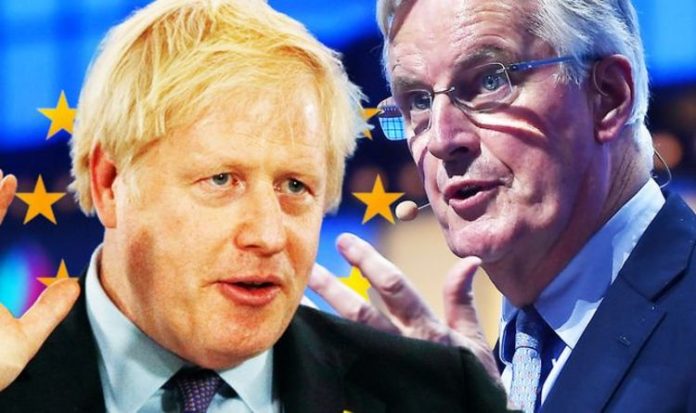 While the UK continues its tense negotiations with the EU, the margin between leaving with or without a deal remains thin with just days to agree and then ratify a trading arrangement. Stalemate over fisheries and trading standards has left talks deadlocks for months, meaning British and European citizens are still unsure as to how their future will be affected. Global Britain – the campaign launched by the Government after the 2016 vote to leave the EU – aims to portray Britain as an outward looking nation ready to work with new partners around the world.

Brexiteers hope that leaving the EU will provide more opportunities to strike trade deals outside of the bloc.

However, Belgian MEP Philippe Lamberts tells Express.co.uk that ‘Global Britain’ will fail, as the UK needs the EU to be a truly international political force.

He said: “I can recognise some people in the UK think the good old days of the empire can come back, and that Britannia can rule again. But this is over.

“The only way to have influence is to be a part of something bigger.”

The Co-President of the Greens in the European Parliament said the UK will even consider rejoining the EU as he predicted Brexit will not provide Britain the platform to succeed.

He added: “I can imagine the UK could realise that yes, it wants to rejoin the EU, but that could take a generation at least.

It could realise that it has too little influence out in the cold. The pathway to being Global Britain is to be part of the EU, you can’t be a Global Britain on your own.

“I think this reality will dawn on the UK especially if the cost of Brexit includes the end of the union with Scotland.

“America, Canada, Australia and New Zealand – we will get all of those – and I’m confident we will get them very quickly.

“And also that ramps up the pressure on the EU, because when you are buying off someone you only need choice don’t you?

“If we join the Trans Pacific Partnership, it will be a bigger trading bloc than the EU.

“And they aren’t asking to take our fish or for us to be governed by their laws and courts.”