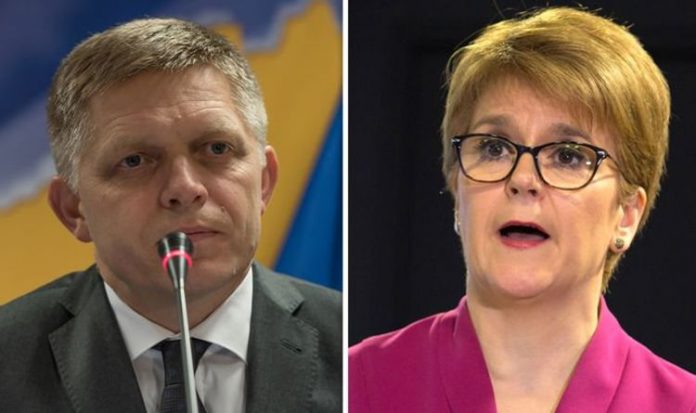 On January 1, the post-Brexit transition period expired, meaning EU rules no longer apply in Britain. It is a new chapter for the country’s national history – but not everyone in the UK has given up on EU membership. Despite Prime Minister Boris Johnson rejecting her independence demands, Scottish First Minister Nicola Sturgeon is determined to hold a second referendum in 2021.

Scotland would need to apply to join again under Article 49 of the Treaty of the European Union and new members can only be allowed into the bloc through an unanimous vote from existing member states.

Spain is struggling with secession demands itself, from Catalonia, so is unlikely to support a newly independent state.

Many also believe Scotland could be rejected by Brussels due to its current deficit of seven percent of GDP, unless it adopted a strict austerity programme from the EU as well as potentially adopting the euro.

Right after the 2016 EU referendum, though, some EU leaders gave Ms Sturgeon the impression Scottish membership in the bloc would have not been an issue.

Former Prime Minister of Slovakia Robert Fico, who at the time had just taken over the presidency of the EU, offered to broker an amicable separation between the UK and Scotland, based on the peaceful “velvet divorce” between his country of Slovakia and the Czech Republic.

Despite six EU nations slapping down Ms Sturgeon’s dogged attempts to break away from the rest of Britain and remain in the EU, Mr Fico said: “Slovaks and Czechs have a unique experience of peaceful separation and we are willing to share our experience with anyone who is interested.”

Ms Sturgeon’s campaign for independence in the wake of the 2016 EU referendum result received a mixed response in Brussels.

As the SNP leader visited the Belgian capital, the German government told the Glasgow Herald it was an “internal” British issue and declined to comment further when asked if it would engage directly with the Scottish government.

Denmark said its minister for foreign affairs “would have not intervened in the internal UK discussions following the referendum”.

The Czech government also said it was “premature to address the question of an independent Scotland and its relation to the EU”.

JUST IN: Merkel’s ‘EU fiscal plan’ could be scuppered by German Court

Some europhiles like former Belgian Prime Minister Guy Verhofstadt and former President of the European Commission Jean-Claude Juncker did send mixed signals to Ms Sturgeon, however.

In an exclusive interview with Express.co.uk, Italian MEP Marco Campomenosi claimed it was all a plot to disrupt internal politics in the UK.

“During the withdrawal agreement talks, [Mr] Juncker was courting the Scottish nationalists, making them believe they were welcome in the EU.

“It was only done to destabilise the Government.

“Brussels could not have had the same attitude towards the Catalans because Spain strongly supports the European Commission.

In 2014, former President of the EU’s finance council Ruairi Quinn explained why Spain and Belgium were likely to block Scotland’s membership.

In a statement released six years ago, Mr Quinn wrote: “In my opinion, it is highly probable that at least two member states, maybe more, will vote no.

“Spain will not want to create the precedent in another member state of a nation/region deciding to leave and join the EU in their own right.

“Such a political development would really encourage Catalonia and the Basque Country to agitate for secession from Spain.”

He added: “Belgium, a Federal Kingdom which has two distinct regions, Flanders and Wallonia, is extremely worried that a Scottish precedent would really encourage the now very rich region of Flanders to secede from the Kingdom.

“This would impoverish Belgium.”

Mr Quinn noted: “If, however unlikely, Scotland was accepted, as a full member it would have to agree that once its economy met the economic criteria of Economic and Monetary Union, as politically agreed in Dublin in December 1996, it would be legally obliged to join the euro.”