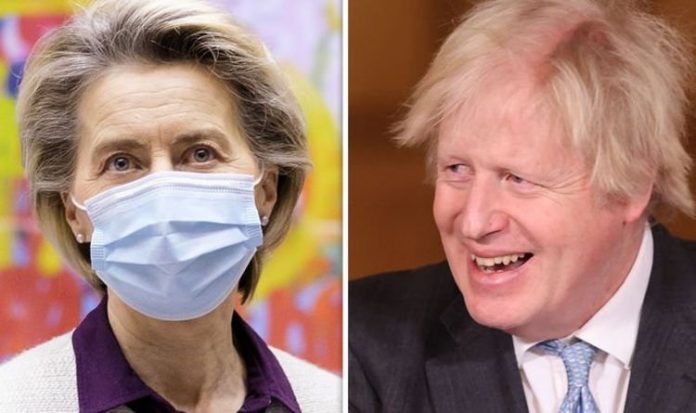 The European Union had a target of vaccinating at least 70 percent of the population in each member state by the end of the summer. However, the events of the last few weeks have put this objective in serious doubt. Thanks to a troubled procurement programme, the EU’s vaccination rate is around a fifth of Britain’s.

The UK has vaccinated more than 12 million people – the third-highest rate behind Israel and the United Arab Emirates – after assembling the biggest vaccine stockpile per capita last year.

Vaccines are most urgently needed in Portugal – currently, the world’s worst COVID-19 hotspot – but the country’s vaccine chief warned on Wednesday that he “can’t do much more” because the EU has not procured enough jabs.

Spanish authorities stopped all vaccinations in the Madrid region for ten days starting on January 27 because of a lack of jabs.

The following day, three French regions including the Paris area faced such a shortfall that they had to suspend injections of first doses to guarantee those already vaccinated their second doses.

This came amid the European Commission’s row with AstraZeneca, which developed its jab with Oxford University. The EU envisaged some 80 million doses arriving by March but the Anglo-Swedish firm informed Brussels on January 22 that, due to problems at a factory in Belgium, it could only deliver 31 million doses in that timeframe.

The row escalated further as the EU said it would be triggering an emergency provision in the Brexit deal to control COVID-19 vaccine exports, including the possible introduction of checks at the border of Ireland and Northern Ireland to prevent shipments entering the UK.

After fierce condemnation from London, Belfast, and Dublin, the EU performed a swift U-turn.

As the recriminations continue, in an exclusive interview with Express.co.uk, Italian MEP Antonio Maria Rinaldi hit out at the EU for not spending enough on developing vaccines.

He said: “The UK and the US spent seven times more than the EU…

“This is ridiculous: the EU accounts for 27 countries.

“And what is happening now is that the UK left the EU, so Brussels is doing whatever it can to discredit whatever Boris Johnson does.

“But look at the vaccine rollout in Britain… Johnson is miles ahead.

Mr Rinaldi added: “Because of this complete disaster, the EU will be the last one to leave the state of emergency.

“We will pay both in terms of death and economic recovery.

“Britain will recover much quicker and it’s all thanks to Brexit and its regained sovereignty.”

The UK committed £1.67billion on Covid vaccines before it was known whether they would be effective – more than the £1.57billion the EU spent on behalf of 27 countries, with Britain spending £25.00 per capita compared to £3.51 for Brussels.

The US government spent £7.9billion in total, according to the figures from science analytics firm Airfinity, an outlay of £24.02 for each of its 330 million people.

Brussels also did not strike a deal with Pfizer until clinical trials had been concluded – while Britain and the US had deals in place in July 2020.

Moreover, it has recently emerged that a French start-up has received an order from the UK for 40 million doses of its vaccine this week – with London to now be given priority access to the jabs over Paris and the rest of the EU.

The vaccine is expected to be in the UK by June this year but may not be available in France until 2022.

President and Chief Business Officer of biotech company Valneva, Franck Grimaud, has estimated that the first vaccines will be delivered to the UK as soon as medical trials are complete, which he believes will be as early as June 2021.

However, vaccines are only likely to be available to the EU by approximately the beginning of 2022, even though the company is based in Saint-Herblain, Pays de la Loire, France.

The Council President of the Pays de la Loire region has angrily blamed French President Emmanuel Macron for a missed opportunity to provide the vaccine to local people.

President Christelle Morançais said: “It is vital that the state proves it has much more agility and reactivity when it comes to supporting and defending our companies at the forefront of fighting the virus.

“France has missed the chance of ‘its’ own Covid vaccine.”