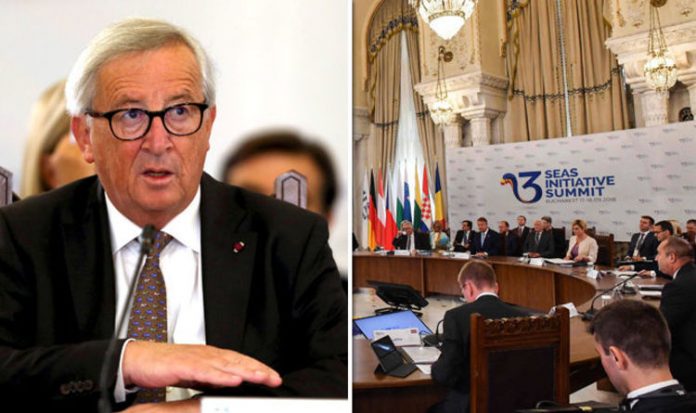 The hardline Eurocrat made a point of delivering a keynote speech to the Three Seas Initiative forum in Bucharest in French.

This was in stark contrast to the other senior politicians speaking at the opening of the event, who delivered their speeches in English.

It is the latest in a long list of attacks by the EU president since Britain voted to leave the bloc.

He said: “English is not the only official language of the European Union.

“French is a big, great, influential language and culture in the European Union and we should not forget that we are not under the rule of the only lingua franca, which is English.”

The Three Seas Initiative, also known as the Baltic, Adriatic, Black Sea Initiative, is a forum of EU countries in the central and eastern Europe.

Mr Junker comes from Luxembourg and supports much-closer ties between EU countries, which he would like to merge into a federal state.

He has been a tough Brexit negotiator, often unwilling to compromise with the British, and is lukewarm about the degree to which the EU should be seeking to boost links with the English-speaking US.

His choice of language for the Three Seas Initiative speech will therefore be seen as a snub to those who see the forum as primarily an attempt to play to the US gallery.

In contrast, Romanian president Klaus Iohannis highlighted through his speech the need for the European Union to forge closer links with the US.

He said: “We strongly believe that, in such a challenging global context, we need the EU and the United States of America to stay as close together as possible, politically, economically and in the security field.

“Despite the differences on some issues, the undeniable truth is that the transatlantic link is based, above all on common values, which are the strongest possible foundations for our relationship. Our common interests rise above our differences.”

It reflects a growing chasm that has been emerging between Eastern European countries, which want a softer Brexit approach and a warm relationship with the US, and federalists from France and other central EU nations.

Foreign ministers from Poland, Lithuania and Romania have called for a more understanding approach on Brexit negotiations with the UK over future defence arrangements.

Jacek Czaputowicz, Linas Linkevicius, Lithuanian and Teodor Melescanu recognised the leading role Britain plays on the world stage, through its ’special relationship’ with the US, and warned the EU should not cut ties.

They said: “Without Britain, the EU’s stance on the global stage may weaken, making it more vulnerable to external threats. It’s in the EU’s interest to involve London in the area of security and defence policy as much as possible.

“Britain’s withdrawal from the EU is an unprecedented situation and as such requires unprecedented solutions. That is why we must ensure there is a constant flow of information between us, and that the UK’s voice is heard.”