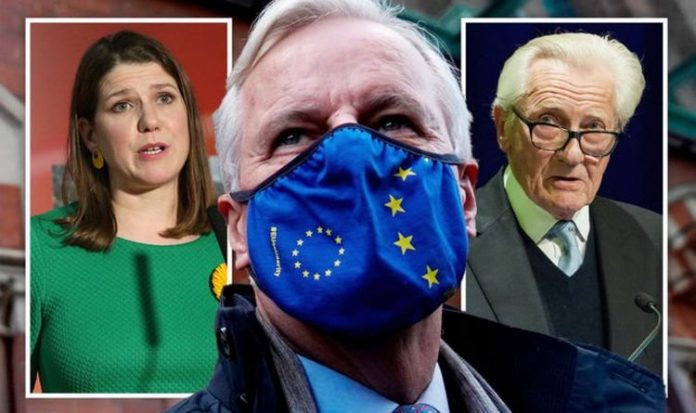 Britons hoping to stay a part of the EU hardly ever argued about what happened in Brussels, skimming the bloc’s vast misgivings, Robert Tombs, the renowned historian, told Express.co.uk. The EU this week stumbled at the most important hurdle in tackling the continent’s coronavirus pandemic. Member states watched on as vaccines, produced by AstraZeneca, left production facilities in Belgium and the Netherlands, headed for the UK.

Countries across Europe last year agreed to hand power to the EU to negotiate the purchase of vaccines on behalf of them.

The bloc sold it as an opportunity to reduce costs and avoid competition arising between member states.

They were still able to strike separate deals with vaccine makers that the EU does not have an agreement with – Hungary has agreed to buy two millions doses of Russia’s Sputnik-V vaccine.

Brussels has yet to agree on a rolling-out method of the vaccine, however, with its “bureaucratic” nature cited by many as the reason for the delay.

It led to the bloc threatening to cut those supplies leaving Belgium and the Netherlands, doses that the UK had already bought.

The crisis exposed splits in the EU’s seams, with German Chancellor hopeful Markus Söder condemning the “inadequate” purchasing procedure, hinting at Europe’s fear that Britain will “benefit economically” as its vaccine programme becomes one of the world’s biggest.

These sorts of failings were always there, Prof Tombs said, but Remainers ignored them while campaigning to stay in the bloc.

He told Express.co.uk that this manifested the debate surrounding Brexit becoming not so much about the EU as it was about Britain and its identity.

What ensued has been described as “probably the most directly class-correlated political choice” since the Fifties.

Prof Tombs, in his book, ‘This Sovereign Isle’, splits the Leave-Remain vote into groups of people who can be categorised by their socio-economic, milieu and identity.

Interestingly, he noted that, “a typical Remain voter might hardly know anyone who voted Leave”, showing just how isolated into factions the electorate had become.

The opposing views, standing in the UK, and priorities meant “both sides started disliking each other quite a lot”.

One of the main arguments for staying a part of the EU was to remain in the single market and customs union, and to continue the free movement of people.

What has been called ‘Project Fear’ invoked images of border closures, crashing stock markets and the City of London uprooting for the continent if Brexit happened.

Political commentator Peter Lyon wrote in 2018, two years after the vote, that “Project Fear has been proved wrong”.

Some of its predictions did come to fruition to begin with.

Last month, “teething problems” surfaced as some EU specialist online retailers said they would no longer deliver to the UK because of tax changes, which came into force on January 1.

Many customers have also complained of being sent tax bills, separate to their online purchases, because of customs charges and duties.

The Government said that things will at first be “unsettled” as the new policies are rolled-out, no small feat after the UK and EU had been wedded for 47 years.

Prof Tombs mentioned that many Remainers seemed to ignore the EU’s misgivings.

This appeared none more so in the Liberal Democrats’ challenge to the Brexit vote, in which it launched its “B******s to Brexit” campaign and promised to reverse the referendum if it won power.

Then leader Jo Swinson, who lost her seat and subsequently her role as leader in the 2019 general election, appeared not once to mention anything about the bloc’s protectionist stance on the rest of the globe, and its debilitating effect on the developing world.

Africa has been devastated by the EU’s Common Agricultural Policy, as countries on the continent are plied with subsidised food to the demise of native farmers who struggle to compete with the low prices.

Atiku Abubala, the former Vice President of Nigeria, in a 2018 piece for Express.co.uk, wrote how Brexit could be “a force for good” for African nations pitted against the EU.

He said: “The EU’s single market is a great example of free trade but where it becomes a case of fortressing Europe against the rest of the world then free trade suffers.

“It imposes high tariffs, particularly on agricultural products but also minerals which punish countries such as Nigeria, preventing us from turning ourselves into an economic powerhouse.”

Mr Abubala wrote of how Nigeria, a country that employs 70 percent of its workforce in agriculture, was being hit by EU tariffs on things like sugar cane and rice.

On the topic of the developing world, Prof Tombs said: “It’s true that the EU operates in some ways like an empire.”

‘This Sovereign Isle, published by Allen Lane, is out now.