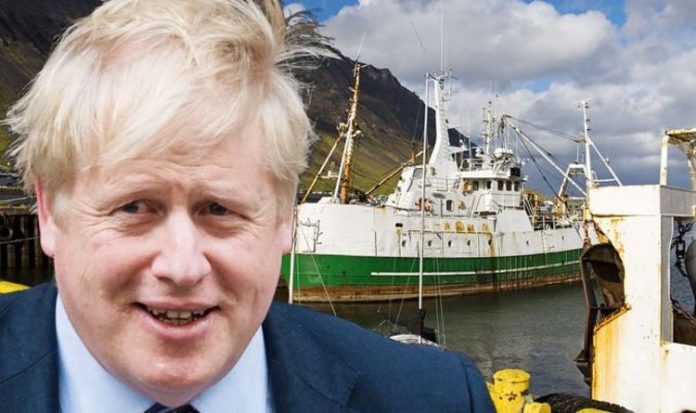 Brexit talks remain deadlocked in the areas of “level playing field” conditions for business and how any trade deal might be implemented. Fishing, championed by French President Emmanuel Macron, is also one of the major bones of contention. The UK insists any fishing agreement must be separate from the trade deal with access negotiated annually in a similar fashion to Iceland’s agreement with the bloc.

Iceland is an independent coastal state, with the rights and responsibilities under international law associated with that status. Stocks shared with the EU are managed through annual bilateral negotiations. Each autumn these talks set total allowable catches on the basis of scientific advice.

This contrasts starkly with the current position of the UK fishing industry within the EU’s Common Fisheries Policy – something Brussels wants to maintain at all costs.

Handing a huge blow to the EU, Iceland recognised the UK’s desire to become an independent coast state, opening the door to a special fishing partnership with post-Brexit Britain.

In 2018, Iceland’s Foreign Minister Gudlaugur Thor Thordarson said the UK should learn from his country’s “successes and failures” and urged former Environment Secretary Michael Gove to put sustainability at the forefront of the new regime.

Mr Thordarson told the Telegraph: “We are totally ready to share our experience and work with you.

“It’s important that we do.

“You can learn from our successes and our failures, and we have had failures.

“Sustainability is the key and it’s very important to protect natural resources.

“You have to be patient, because you get paid [with results] later.”

A captain for ten years, fleet manager at Thorfish Eiríkur Oli Dagbjartsson also said he was delighted on behalf of his British counterparts that the UK was leaving the EU.

He said: “Without a doubt I think you are doing the right thing.

“There are so many more advantages than there are disadvantages for us when it comes to joining the EU fishing policy.”

He urged the UK to prioritise sustainability after Brexit, as it was “fundamental…we invented the quota system because our stock was in serious trouble, now it has grown significantly in the last few years”.

Iceland is part of the European Economic Area along with Norway and Liechtenstein, which means it gets market access for fewer obligations.

The Nordic country applied to join the EU in 2009 but dropped the application in 2015.

Iceland’s former fishing minister Gunnar Bragi Sveinsson explained in a 2016 interview how his country proved “there is a life outside” Brussels.

Mr Sveinsson suggested that Iceland is much “better off” outside the bloc and claimed a key factor in their application withdrawal was the desire to retain control of their waters.

The nation now has one of the most modern and productive fishing industries in the world.

He told the BBC: “I would never join the European Union – there is a life outside it, as we have proven.

“We have one of the biggest and one of the strongest fisheries in the world that is sustainable without any subsidies from the state.

“We don’t have to share this decision-making with anyone else.

“It would be difficult for Icelanders to control their economic and fisheries sector having the obligation to discuss it with 27 or 28 other countries.”

Last month, Fisheries Minister Victoria Prentis signed a Memorandum of Understanding (MoU) with Iceland which will increase cooperation on matters relating to fisheries.

It is the fourth such agreement with Nordic nations and follows Greenland, Norway and the Faroe Islands.

Number 10 said the agreement will establish a UK-Iceland Fisheries Dialogue, where both countries can share best practice and cooperate.

In the agreement, which comes into effect on January 1, the UK and Iceland also recognised the need to promote responsible fisheries to ensure the long-term conservation and sustainable use of marine resources.

Ms Prentis said: “This agreement demonstrates the strong relationship between our two nations on matters including trade and fisheries.

“I would like to thank our Icelandic counterparts for the constructive approach they have adopted throughout these negotiations.

“We have already seen the potential of working together given the number of shared issues and objectives our countries have on fishery management, and we look forward to continuing this constructive dialogue.”

Kristján Þór Júlíusson, Fisheries Minister for Iceland, added: “With this Memorandum of Understanding we are ensuring that Britain’s exit from the European Union results in enhancing further the good cooperation Iceland has had with the United Kingdom.

“I am pleased to note that there is clear mutual interest in the two countries to have close coordination and cooperation regarding fisheries.

Shrewsbury MP Daniel Kawczynski also welcomed the news claiming Iceland had shown how “agreements can be made unlike the dogma and intransigence of EU”.