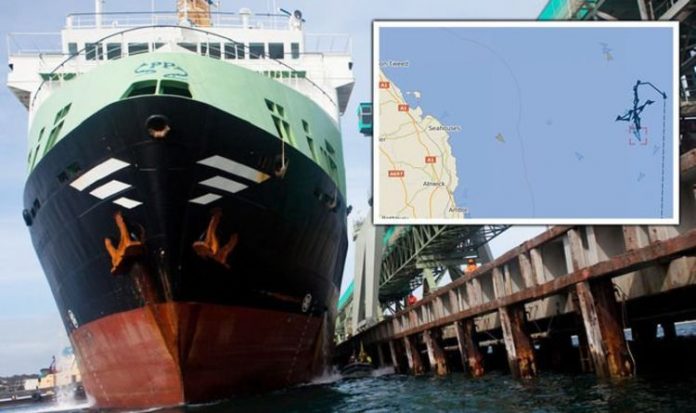 The massive boat, which has been banned from Australian waters since 2013, was last week seen off the coast of Yorkshire and Tyne and Wear, and its presence in British waters sends a signal about the intentions of such vessels with the end of the Brexit transition period at the end of the year. Yesterday it had apparently moved on the the Farne Islands of the coast of Northumberland, which is a designated nature reserve. The Margiris, which is registered in Lithuania but owned by Dutch fishing company Palevilet & Van der Plas, is 14 times the size of average British trawlers, and is one of 25 which were active in British waters last year.

“Banned from Australia for high levels of marine mammal by-catch and unsustainable fishing practices this floating factory faces protests wherever she goes.

“The people of Scarborough and Bridlington have every right to be absolutely furious.”

“The Farne Islands are an internationally important home to seals, dolphins, porpoises, minke whales and thousands of seabirds.”

The Margiris was near the Farne Islands, a nature reserve, yesterday (Image: Greenpeace/Vessel Finder)

The Blue Planet Society claims the practices of supertrawlers result in the deaths of large numbers of dolphins and other cetaceans.

Volunteer John Hourston set up a petition directed at Virginijus Sinkevicius (EU Commissioner for Environment, Oceans and Fisheries) entitled “Stop the mass slaughter of dolphins by the fishing industry in EU waters” which had been signed by 293,067 people as of 7.30 today.

“This barbaric practice is dismissively referred to as ‘bye-catch’ by the fishing industry.”

READ MORE: Enough is enough! Boris is NOT bluffing with October 15 deadline

Last month 57 MPs signed a letter coordinated by environmental campaigners Greenpeace calling for a ban which would prevent supertrawlers from operating in any of the Marine Protected Areas (MPAs) which surround the UK.

Sir Roger Gale, Tory MP for North Thanet, one of the signatories, told Express.co.uk: “We have this absurd situation where we have these protected zones around our coast but we are not protecting them from the predations of supertrawlers.

“It’s as simple as that – there is no point having protected zones if you don’t protect them.

“These things are huge, massive – they are hoovers.

The issue of fishing rights has been a central plank of Brexit (Image: GETTY)

“I think we need to start taking a firm grip on this now, irrespective of any agreement which might be reached on fishing.

“A lot of these zones are in our waters and these vessels come from all over – Russia, the Netherlands – and they are basically floating fish factories.”

“Yet we seem to be prepared to allow the world and his brother come in hoovering up everything in sight.”

Jeremy Percy, director of the New Under Ten Fishermen’s Association (NUFTA), which represents fishermen who use boats of less than ten metres in length, believes supertrawlers such as the Margiris may be staking a claim in British waters as the end of the year – and the UK’s exit from the Common Fisheries Policy – approaches.

He told Express.co.uk last month his suspicions had been aroused after spotting one of the ships off the east coast which did not appear to be catching much fish.

Mr Percy added: “I explained this to a good friend of mine who is an expert in this sort of fishing and he didn’t think they would be making any money there so the idea that they were continuing to build up a track record to strengthen their arguments post Brexit seemed sensible.”

A Defra spokeswoman told Express.co.uk the situation was likely to change after the end of the year.

She said: “The UK is a global leader in the fight to protect our seas with our ‘Blue Belt’ of protected waters nearly twice the size of England.

“The Common Fisheries Policy currently restricts our ability to implement tougher protection, but leaving the EU and taking back control of our waters as an independent coastal state means we can introduce stronger measures.”

Philip Evans, an Oceans Campaigner at Greenpeace UK, said: “As Britain’s departure from the Common Fisheries Policy looms large on the horizon one of the world’s most controversial supertrawlers, the Margiris, has returned to UK waters, and so far has spent time fishing in various protected areas in the North Sea. A fishing vessel banned from Australian waters which can catch and process thousands of tonnes of fish has no place operating in the UK’s allegedly protected waters.

“We recently revealed that supertrawlers have already doubled their fishing effort in UK protected areas in the first six months of this year, and the Margiris’ return makes even more clear that our protected areas are little more than lines drawn on a map, with no tangible protection.

The Margiris is a Dutch-owned vessel [GETTY]

The Margiris of course is fishing based on and within allowed catch quota – in this case catch quota for North Sea herring – and under entirely legal conditions. Also the Margiris is catching this North Sea herring under the sustainability label of Marine Stewardship Council (MSC), which is the most renowned and best-known sustainability label for fisheries.

The only reason why the Margiris is larger in size than other (for instance Scottish) pelagic trawlers is that the Margiris processes and freezes the fish on board, immediately after catching. While the Scottish pelagic trawlers only catch fish and after catching immediately sail to port to land and sell the fish to a land-based pelagic factory (where the fish is processed and frozen).

The fact that the Margiris has fish processing, freezing and packaging equipment on board and large storage rooms, makes it this large in size. Not because we want to fish more than the other pelagic trawlers. On the contrary, the daily catch is limited by what the vessel can process and freeze per 24 hours on board.

The Margiris – just like all our vessels – has the most up-to-date acoustic fish find equipment on board with the sole aim to fish as selective as possible. And we do fish very selective: we have on average in all our fisheries less than one percent of non-targeted species in our catch.

On top of this: in the area where we are fishing at the moment (off the East Coast of the UK) we have implemented in our nets a so-called excluder device. This is a voluntary precautionary measure to even further reduce the possibility to by-catch marine mammals such as seals in our fisheries.