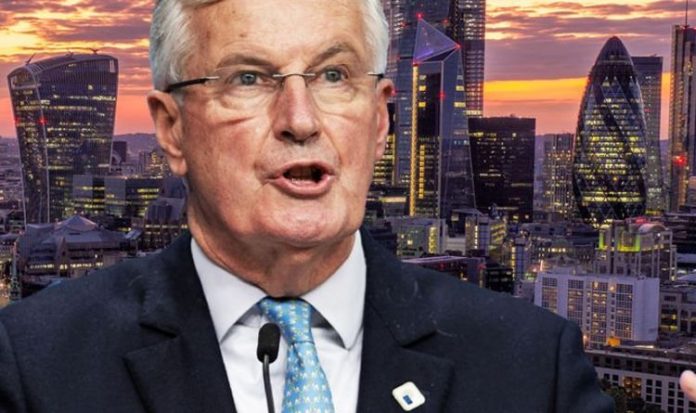 Mr Barnier sparked controversy during his visit to London this week as he taunted the Prime Minister over the dispute over a so-called level playing field. It came as the EU’s chief Brexit negotiator took a stroll in Regent’s Park, West London. Posting a snap of his outing alongside a football pitch to Twitter, he wrote: “Short break from intense EU-UK negotiations in London,” he commented, adding: “Went looking for level playing fields…”

Level playing fields, future EU access to UK fishing waters, and workers’ rights have all been thorns in the side of any breakthrough agreement between Westminster and Brussels.

The current Brexit standoff has been widely blamed in Brussels circles on infighting in Downing Street with the news of Lee Cain’s departure, and now Dominic Cummings’ confirmation that he will leave by Christmas.

Manfred Weber, the leader of the largest party in the European Parliament and an ally of German Chancellor Angela Merkel lamented the “chaotic situation” unfolding in Westminster.

As Mr Barnier cracked his joke, the UK similarly accused the EU of failing to make progress in trade talks.

Brexit news: Michel Barnier has taken aim at the City of London several times over the years (Image: GETTY)

It isn’t the first time Mr Barnier has stoked anger around the question of the EU’s hand in the UK.

The Frenchman for years appears to have had his sights on the City of London ‒ one of the world’s most successful and bustling financial hubs.

While holding the post of EU commissioner for internal markets and services between 2010 and 2014, a slew of his comments infuriated ministers and business people.

It came as he called for more financial regulation; a move that many claimed was Mr Barnier’s way of trying to dilute London’s status of being Europe’s financial centre.

Alex Barker, a business and finance expert, reported how Britain’s financial world was left reeling at the time, in 2011.

Writing in the Financial Times, he explained that ministers saw Mr Barnier’s proposed measures as readying to devastate the finance sector and compressing Britain’s size as a business world-leader.

This was only furthered over suggestions that then Prime Minister David Cameron moaned over the City being “constantly under attack”.

As Mr Barker said: “Already, rivals such as Paris and Frankfurt are on the march.

City of London: The financial behemoth has long been considered the business capital of Europe (Image: GETTY)

Boris Johnson: The PM has said he is prepared to go forward without a deal (Image: GETTY)

Mr Barnier has consistently taken aim at the City elsewhere.

In 2018, he said that the EU did not need the City, also warning that any attempt made by the UK to protect it was doomed to fail.

This latter point was made during negotiations talks this summer, when Mr Barnier outright refused to accept Britain’s financial wishes because they would hurt the bloc.

Brexit timeline: The two will trade on WTO terms should a deal fail to be agreed on (Image: Express Newspapers)

Speaking in Brussels, he said: “I will be blunt. Its proposals are unacceptable.

“The UK is trying to keep as many single market benefits as it can.”

Meanwhile, Michael Gove, the Chancellor of the Duchy of Lancaster, yesterday said that the “penny is dropping” in Brussels over the UK’s post-Brexit status as an independent nation.

It came as Government sources close to the trade talks between the UK and EU told the BBC that negotiations were in the “final stage”.

While talks in London are coming to an end shortly, discussions will continue into next week in Brussels.

Mr Johnson has said he is prepared to move forward without a deal.

The UK and EU will trade on WTO terms should an agreement fail to be reached.

This would come into force by January 1, when the transition period ends.