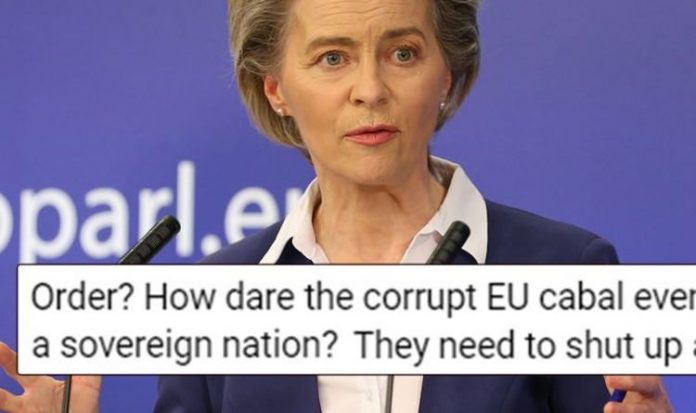 Brussels has been embroiled in a bitter row with the UK-based pharmaceutical giant since last week after it emerged that AstraZeneca would not be able to fulfil promised delivery targets. European health commissioner Stella Kryiakides insisted Britain should have “no priority” access to doses of vaccines produced in the country.

She instructed eurocrats to explore potential legal avenues to force AstraZeneca to begin shipping UK-made jabs to the continent.

Express.co.uk were quick to shoot down her order, with many pointing out that the UK is now an independent and sovereign nation after Brexit.

One person hit out at the EU for trying to call the shots in the vaccine dispute.

And another said it was “truly ugly” how the bloc is trying to blame others for its vaccine problems.

In comments, one reader wrote: “They can’t order us to do anything any more.

“I thought we’d left this nightmare.

“Why is this even up for debate?”

A second said: “Order? How dare the corrupt EU cabal even consider ordering a sovereign nation?

One reader said if the EU had made a “request” for the vaccines to be diverted to the bloc rather than a demand they would not have looked so out of place.

Another used the row to turn to the huge delays at ports following the end of the Brexit transition period on December 31.

Multiple companies have said their product was held up at border posts if the drivers had incorrectly filled documents.

The frustrated reader said: “You should tell them we’d love to send them, but their customs people are banning British goods at the border so instead of wasting them in the back of a lorry we’ll keep them until the border is open.

“Alternatively tell them we sent them but they were refused entry because a full stop was in the wrong place!”

On Thursday AstraZeneca signalled its readiness to publish a redacted version of its coronavirus vaccine delivery contract with the EU, according to an EU official.

The company insisted on blacking out sensitive parts of the document, the official said, confirming a report by German newspaper Frankfurter Allgemeine Zeitung.

The EU did not yet have details about the parts of the contract the drug maker planned to make illegible, the official added.

A report by Faz.net said the drug maker aims to settle disagreements over its contract in proposals to the European Commission by Friday.